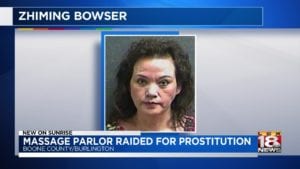 BURLINGTON, Ky. (LEX 18) — Deputies with the Boone County Sheriff’s Office were joined by FBI and ICE agents in raiding a Burlington massage parlor.

Police said they documented illegal activity and then conducted a search of the business.

Both are charged with felony counts of promoting prostitution.

They were booked into Boone County Jail but since have been released on bail.