FRANKFORT, Ky. (LEX 18) — After a crime is committed, victims sometimes feel like they are forgotten, but a Kentucky council, called the Survivors Council, is working to change that by advocating for victims’ rights.

On Wednesday, 20 survivors stood with Attorney General Andy Beshear as he spoke about the council. 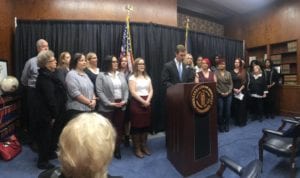 His office created the council in 2017. The current 20 members make up the second version of the council.  For the next two years, they will advocate for victims’ rights throughout Kentucky and the rest of the United States.

One member is Anita Franklin, a Lexington mother whose son was killed when he got caught in cross-fire. Since then, Franklin has openly talked about ending gun violence.

Some members of the council spoke out for the first time Wednesday. They made it clear that the choice to do so was not easy, but they felt it was necessary.

“Oftentimes people may look at us up here and think we are different than them because we’re brave and we’re standing up here. We’re no different than anybody else, and I, personally, am terrified and I’m sure there are a lot of people here as well, but we want to make a difference,” said Ify Whitfill, a Survivors Council member.

The council aims to take the stigma away from being a survivor.