A deputy observed a white pickup truck driving erratically and before a traffic stop could be made, the driver lost control of the vehicle. It reportedly went off the side of the roadway in a curve.

At that time, the driver got out of the vehicle and fled on foot. The deputy made contact with a male and female passenger that were still in the truck and they were able to give a description of the male driver who fled, but stated that they didn’t know his name. 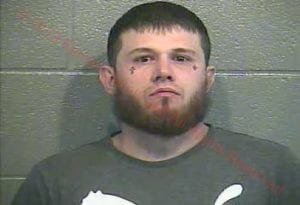 The deputy ran the vehicle’s license plate and confirmed that it was stolen out of Glasgow. Upon searching the vehicle, several tools were found that were believed to also to be stolen, as well as two bags containing suspected methamphetamine.

Both passengers were arrested at the scene. The driver was later located in a nearby field by a civilian and he was taken into custody without further incident.

The driver was identified as 54-year-old John Wheat, of Glasgow. He is facing multiple charges, including third-degree criminal mischief, second-degree fleeing or evading police–on foot, and receiving stolen property U/10,000.00.

All were lodged in the Barren County Jail.