LEXINGTON, KY (Lex 18) – The possibility of snow this weekend will come as good news to many landscapers in Central Kentucky.

With any accumulation, it’ll be the first time in more than two weeks they get paid to clear snow. 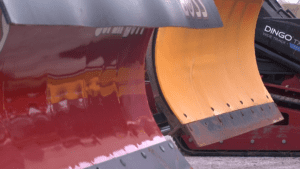 “It seems like every other day it’s just rain, rain, rain,” said Mike Clarkson, owner of Lawn Works Landscape Design and Installation. Clarkson isn’t scared of a little rain though. He’s annoyed by it.

At this time of year, he makes his money when the temperature drops below freezing.

“Normally this time of year we’re fairly busy with snow removal and de-icing parking lots, but this year it’s been about as slow as it gets,” Clarkson said.

Though his business is a year-round operation, snow removal makes up about 25% of Clarkson’s annual revenue.

Since December, Lexington has seen above-average amounts of rain and below average snowfall. In fact, January 30th was the last time Lawn Works, along with many other Lexington landscaping companies, did any snow-related work

“You never know if one year is going to be better than the other, but this has probably been the slowest snow removal year I’ve had since I began in 1990,” said Clarkson.

Though snow is in the forecast for the region, any accumulation would come late Friday night into Saturday morning.

“The weekend is definitely a lot slower than during the week,” Clarkson said. “A lot of businesses aren’t open, but we’ll do probably a third of what we normally do.”

Clarkson calls it a gamble that Mother Nature always wins. For now, he’ll be prepared for any work that comes and he’ll be hoping for a busy spring and summer.