SCOTT COUNTY, Ky. (LEX 18)– A man has been apprehended after a chase that happened in Scott County Thursday. 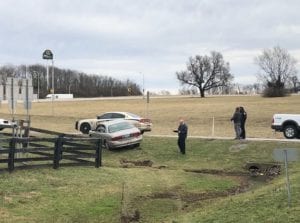 Police say that Scott County Dispatch received a call about someone going through mailboxes in the area of Thistle Way.

When deputies arrived in the area, they say they located the vehicle off Newtown Pike. They say that the man inside was trowing mail out of the window.

As a deputy approached on foot, police say he backed up quickly, almost striking the officer with his vehicle, then he fled.

Spike sticks were set up in the inbound lane of Newtown Pike near Ironworks Pike in Fayette County.  As the spike strips were being set up, deputies say that the man began to drive toward them.

Police say this caused the deputies to fire their weapons at the vehicle.

The suspect briefly veered into oncoming traffic before his car went into the ditch by the McDonald’s on Newtown Pike. Police say the suspect then fled on foot and was apprehended at a nearby hotel.

The vehicle was hit by the gunfire, but the driver was not hit or injured.

The driver has been identified as David Williams. Police say he is from Michigan and has felonies and a warrant out for his arrest out of Kentucky for engaging in organized crime and possession of forged instruments.

In Scott County, he will be charged with theft of mail matter, tampering with evidence. reckless driving, and fleeing and evading police. 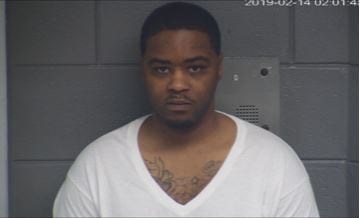