GRAVEL SWITCH, KY (Lex 18) – For the eighth straight year, Kara Tingle’s family members celebrated her birthday without her on Thursday.

It’s an unfortunate tradition they’d like to change soon, but not one they have any plans of stopping. Tingle has been missing since 2010. 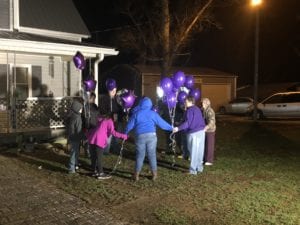 “It’s something we feel like we can do to remember Kara and not let her name and everything that’s happened to her die,” said Sheila Tingle, Kara’s mother.

In July it’ll be nine years since Sheila Tingle’s daughter disappeared from Beechfork Loop in Gravel Switch. She left behind a then, newborn daughter and seven-year-old son.

On Thursday, she’d be 36-years-old. Her family asked everyone in town to wear her favorite color purple in her honor.

“I’m happy it’s her birthday and I’m happy for all the support and love I’ve been shown today, but in my heart, I’m still sad because I have a daughter that’s missing,” said Sheila Tingle.

At the time of her disappearance, Kara was on the “outs” with her estranged husband, Bobby Rigdon, who is currently in jail for a murder in Casey County.

To this day, there are no charges or answers in Tingle’s case, which family hopes changes before her next birthday.

“If she’s still here on earth, God is taking care of her,” said Tingle. “if she’s not here on earth she’s in heaven, and that’s a better place than where we’re at.”