FRANKFORT, Ky. (LEX 18) – A grassroots organization is calling for Kentucky teachers to call in sick to work in advance of a committee vote on House Bill 525. Now, Fayette County schools are cancelled tomorrow due to a high number of employee callouts.

“Please call in sick tomorrow and text your co-workers to do the same,” reads a message from the group

HB 525 was filed by Republican Representative  Ken Upchurch of the 52nd district. The bill seeks to change the general administration and management of the Teachers’ Retirement System Board of Trustees and its responsibility for “proper operation.”

Stephanie Winkler explained why the Kentucky Education Association is opposed to the bill on a Facebook live posted to her page.

Here is a partial screenshot of that message. 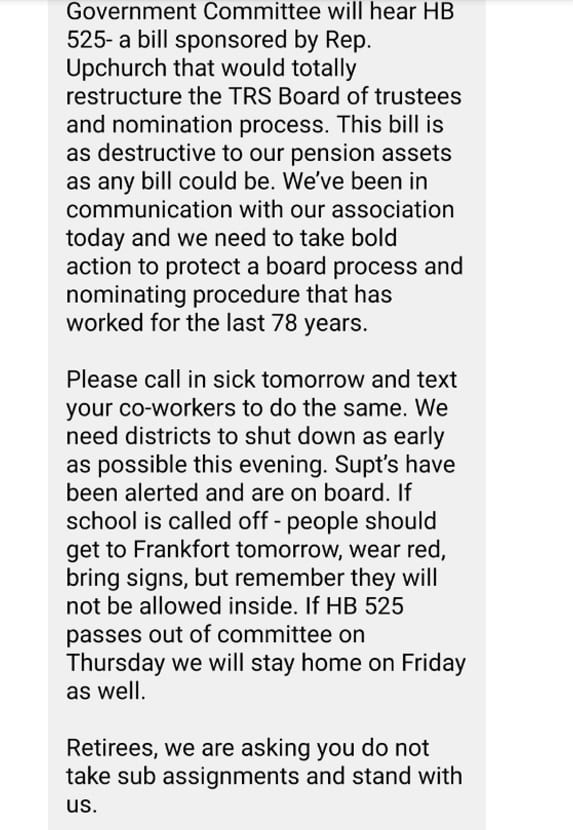 “I have been told that teachers in at least two of our largest school districts are planning a ‘sick out’ to protest the preliminary version of legislation that seeks to give educators more say in their own retirement.

It is staggering that people would strike so early in the process and more astonishing that the organization that says they represent teachers’ best interests has called for it. We have been working for more than a week on a committee substitute that will not only increase the say teachers have – particularly those with JCTA – but also the voice of retired educators. Despite this, I am hopeful that we can still have a rational conversation on HB 525”