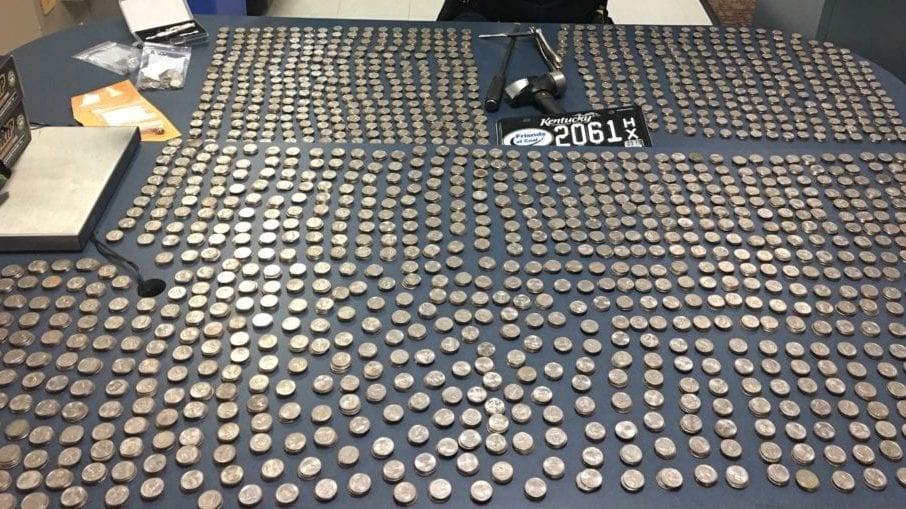 Authorities said an officer saw Estep stealing money Sunday from an air pump at a Speedway station on Elkhorn Drive. Estep got into a truck driven by Lear, police said, and were then pulled over. Police said $10 in quarters fell from Estep’s lap as he exited the vehicle.

A subsequent search turned up hundreds of dollars in quarters, a stolen license plate, and tools used to pry the machines open, police said.

Police said the pair were connected to Jackson and the Pelfreys, who face similar charges. Jackson and Steven Pelfrey already were in custody, while there is a warrant out for Nathan Pelfrey’s arrest.

Estep was charged with two counts of third-degree mischief,

Lear was charged with two counts of third-degree criminal mischief, possession of burglary tools, two counts of theft by unlawful taking and theft of a motor vehicle registration plate.

Jackson was charged with theft by unlawful taking. Steven Pelfrey

was charged with third-degree criminal mischief and two counts of theft by unlawful taking.

There is a warrant out for Nathan Pelfrey on charges of third-degree criminal mischief and two counts of theft by unlawful taking.

Lexington police are asking anyone with information about Nathan Pelfrey’s whereabouts to call 859)-258-3600.