(LEX 18)– As this legislative session nears an end, the President of the Kentucky Education Association called out an advocacy group in Jefferson County.

Stephanie Winkler asked the group Dear JCPS to “stop putting fear in folks who are already fearful enough,” and to “quit ramping up rhetoric that has no basis in fact.”

Jefferson County teachers have had six sick outs this year.

Teachers protested at the state capitol as lawmakers considered proposals that would change who manages their pension fund and that indirectly support private schools with tax credits. 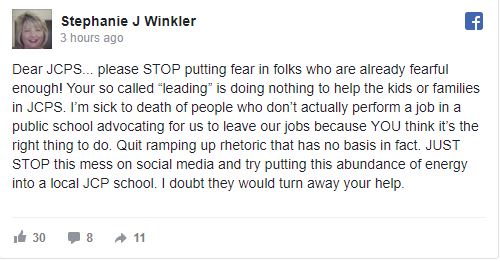