A photo of a sign hanging from a two-story house on University Avenue was posted to Twitter.  It reads, “We’re going to finish what Harvey started…. #CatsBy90.”

The UK student deleted the initial Tweet but a screenshot was taken and posted by the account @BarstoolCoogs.

An LEX 18 News crew drove past the home and the sign was still up.  Our reporter knocked on the door and the home’s occupant ripped the sign down.

UK will face off with the Houston Cougars tonight in Kansas City. 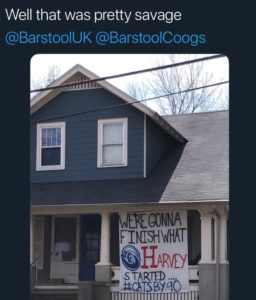