UK Student Groups Vow To Fast, Occupy Until Their Needs Are Met 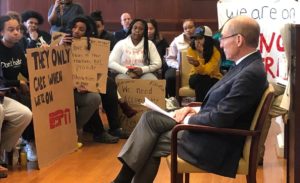 Some of the students are fasting until their needs are met.

The conversation between the president and the students occupying the Main Building, which houses the University’s administration offices, was passionate, and emotional at times.

“We are here telling you that we need things done. We pay tuition to be here. We pay tuition for our black brothers to be on ESPN glorified, while people here can’t eat. We have people in this room who can’t eat, but y’all just offered Calipari a lifetime contract,” said JD Brown-Lewis with the Black Student Advisory Council.

The council first detailed what they wanted to see. They want their council added to all hiring search committees for the University’s senior-level administrative roles.

They also want to revise the William C. Parker Scholarship. The scholarship was originally offered specifically to black students but has since been opened to all students.

The Black Student Advisory Council also states that they want to see the roles of college diversity offers standardized, and they want the findings of a 2016 survey on campus climate to be released in full.

Another topic that was discussed on Tuesday was that the council wants to see the mural painted in Memorial Hall removed. The mural was painted in 1934 and includes images of enslaved Africans, as well as Native Americans.

“The mural has no place on a university campus, it has no place, just like confederate statues, in a modern era where black people are valid human beings,” said Tsage Douglas of the Black Student Advisory Council. “The University of Kentucky is more committed to upholding a racist past than it is to pushing forward to a new and brighter future with its current students.”

Capilouto formed a committee some time ago that explored other options of the mural, saying that the mural cannot physically be moved, so the committee and Capilouto chose to “add content to the mural with a companion piece.”

The students say that it’s not enough.

You can read the Black Student Advisory Council’s demands in full below. They were presented to Capilouto back in October: 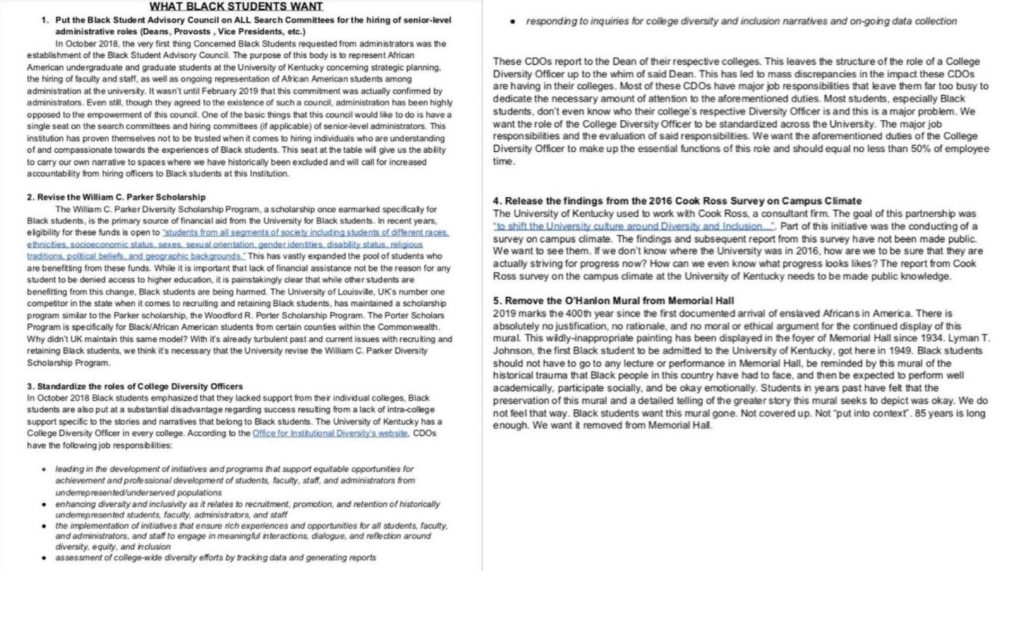 “He’s known about these commitments that we’re presenting today since last semester. None of this is new information and so when we received only one commitment and the rest he committed to task force, it’s not adequate,” said Douglas in reference to the group being upset that there still aren’t any commitments, even though the demands were presented in October.

“The matters that you’ve raised to me, when I say I can’t fully understand them, because I can’t say as a white man with privilege to know what it must be like for you every day,” said Capilouto.

A student in the audience said that the issue was about human compassion, to which Capilouto replied, “We have more black students here, we are graduating more black students here. We want to increase funding. I want to work on every one of these, so please sir, I hope that you will respect that I do have a heart. It hurts for you.”

The second student group was the Basic Needs Campaign.

That student group has been on a hunger strike since March 27th over food and housing insecurities that students at the school are facing. They tell LEX 18 that they will not eat again until basic needs like affordable food and housing are made a priority of the administration.

The university released a statement detailing how students can receive basic needs assistance, but the group argues that those are day-to-day fixes and there is not a resource available at the university to help bring students out of those hardships.

“We’re looking for something long-term, something that will last for decades, and that’s what a basic needs center would be,” said Beau Revlett, a Basic Needs Campaign organizer.

After the discussions, the students from both the Basic Needs Campaign and the Black Student Advisory Council said that they were not satisfied with Tuesday’s meetings.

“Students came and spoke for themselves and showed the university what they need and the ball is in the university’s court now to address those needs,” said Revlett.

The students say that they will continue to occupy and to fast until their needs are met.

To donate to the University of Kentucky Black Student Advisory Council, click here.