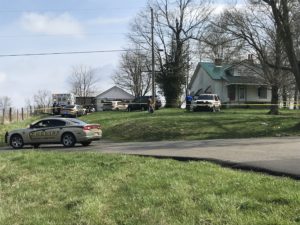 GEORGETOWN, Ky. (LEX 18) – A man is dead following a shooting in Scott County, in the same area where a stabbing happened several weeks ago.

While sheriff’s deputies say the incidents are not related, family members are still left with many questions.

The Scott County Sheriff’s Office was called to a home in the 3100-block of Long Lick Road around 10:30a.m. on Sunday.

Deputies believe there was an argument inside the home between family members, and one person then shot their relative.

The man who died has been identified by the coroner’s office as 47-year-old Michael Ray Smith.

“I just wish this nightmare would be over, I just..tell me I’m having a bad dream,” said the victim’s sister Bridgette Lancaster.

Deputies say there were seven people home at the time of the shooting, including five children.

Right now no one has been charged but the shooting remains under investigation.

The block where this happened is the same area where police say three individuals were stabbed last month over an ongoing dispute.