(LEX 18) – The Kentucky Labor Cabinet has issued a subpoena related to teacher absences during a sickout to both Fayette and Madison Counties.

In previous months, Education Commissioner Wayne Lewis had asked for the names of teachers who called out sick during protests at the state capitol.

2.) Any and all affidavits or certificates of a reputable physician stating that the employee was ill or caring for an ill family member on the days the employee called in sick, as required by KRS 161.155 for the granting of any sick leave; and

3.) Documentation of the district’s policies, procedures, and/or protocols for collecting sick leave affidavits or certifications and verifying qualification for the granting of sick leave.

Lewis warned that the Labor Cabinet could take action against schools with fines.

“Our school district has received the subpoena and not yet reviewed it. We believe the guidance and leadership provided by Commissioner Lewis has sufficiently addressed any concerns. As Superintendent Caulk has previously told the committed men and women who work in the Fayette County Public Schools, we are confident that no adverse action can legally be taken against any of our employees. If any such action is attempted, the district will take legal steps to vociferously defend them. In FCPS we remain focused on what’s most important – working with our partners at the Kentucky Department of Education to ensure that all students achieve at high levels and graduate prepared to excel in a global society.” 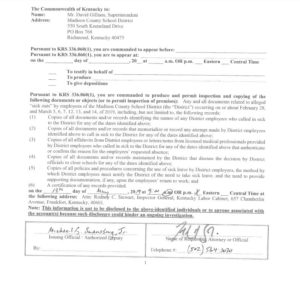