PARIS, FRANCE (Lex 18) – As flames engulfed one of the world’s most iconic landmarks, crowds of people gathered in Paris to watch and hope the flames wouldn’t destroy Notre Dame. Among those people were two Kentuckians who have their own personal ties to the cathedral.

30 minutes away at the Arc de Triomphe, Jamie Vescio’s saw large clouds of smoke but didn’t think much of it. Little did she know, it was coming from the place she visited just hours earlier.

“I just kept noticing that smoke was just growing more and more, so I asked the taxi driver what that was and he said it was Notre Dame, and my heart just kind of sank,” She said via Facebook video chat.

She said she’s visited the historic cathedral many times and is thankful she was there again today.

“I feel lucky we were able to see it, but also pretty sad it’s going to take a toll on the people living here and for tourists in the future as well,” Vescio said.

UK Theatre professor Nancy Jones is currently in Paris doing research. She was able to get close enough to take pictures.

“It was just an unbelievable sight,” Jones said. “Like, this was something out of a movie, not something happening in real life.”

Jones described how she saw a wide range of emotion coming from people watching the heartbreaking scene. 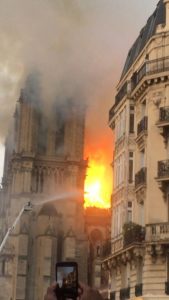 One image stuck out the most.

“I’ll never forget there was a woman, she was literally kneeling on the ground, looked to be in her 50s, just weeping and wailing,” Jones said.

Jones often takes student groups to the landmark and recently went on her own for a concert.

As she watched the fire consume most of the cathedral, she reflected on all her experiences there.

“I couldn’t help but think to myself as I watched this, I may have been in Notre Dame for the last time,” Jones said. “I hope not. I hope they are able to save it.”