LEXINGTON, Ky. (LEX 18) — A Lexington principal with a large social media following made a video about the college recruiting scandal that is getting a lot of attention. 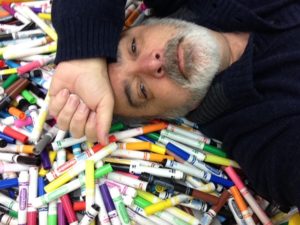 “This all started with trying to relieve stress from my teachers and staff on state testing. And I noticed that everyone was tremendously stressed right as we lead up to it. Because of the high pressure, we had to get good scores, and so I made a humorous video about us having to take everything off the walls,” said principal and social media influencer Gerry Brooks.

His latest video called “Aunt Becky ERYDAY!!! For reals…” has over 8 million views.

“You know what this is? A parent not agreeing with a policy, or a rule, sometimes even a law, so they’re going to do whatever they want because they think it’s best for their child. Um yeah, I signed my child’s reading log but he didn’t read, but we had a soccer game until 10 and I disagree with that policy that they shouldn’t have to read e’ry day anyways. You know who disagrees with policies? Aunt Becky,” he said.

Brooks told LEX 18 that he had two missions with the Aunt Becky video.

“Supporting educators and making light of that we deal with this every single day. And everybody else in the nation was floored. ‘Oh my gosh, I can’t believe the parents did this.’ And we’re like, ‘What do you mean you can’t believe that? We deal with it on a daily basis,'” he said.

He has posted more than 200 videos online but keeps his goal the same.

“Just put some humor behind the things that we go through, and be able to pull us together and support each other,” Brooks said.

He is also releasing a book April 30 titled “Go See The Principal.” He said that his book of lessons will translate to all professionals.