GRANT COUNTY, Ky. (LEX 18)– A Northern Kentucky food truck is selling merchandise that has brought them a lot of criticism.

The shirts twist the acronym for LGBTQ, as if the letters stood for Liberty, Guns, Bible, Trump, and BBQ. 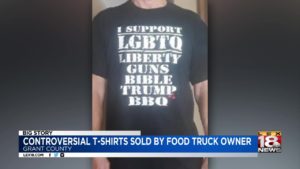 After Belle’s Smokin’ Barbecue owner Jamie Smith advertised the new shirts in a social media post on Thursday, the blowback was swift. Many commented that the shirts were hateful and offensive.

One commenter noted that the LGBTQ community has had a mountain to climb in terms of acceptance and that “the last thing we need is a food truck mocking us.” Another commenter accused the business of bigotry.

Chris Hartman, the Executive Director of the Fairness Campaign tells LEX 18 that these are the type of messages that make LGBTQ youths feel isolated.

“It isolates not just members of the LGBTQ community, but also their family, friends, co-workers, and loved ones. These are the types of messages LGBTQ kids see that make them feel isolated and that they won’t be accepted in their community,” said Hartman.

Smith, meanwhile, is brushing off the criticism, saying that he’s “sorry if anyone was offended” but that he won’t apologize for selling the t-shirts.

“I’m not mocking anyone, there was no intent to be offensive to any group or any organization,” he said.

Smith says he is now getting calls from across the country, some from people upset about the shirts and some people who want to buy them.