Time Almost Up For Reward Offered In Spurlock Disappearance

MADISON COUNTY, Ky. (LEX 18) — The father of a missing Madison County woman offered a $10,000 reward to anyone whose tip leads to his daughter, but the time for that reward is almost up.

Mother of four Savannah Spurlock was last seen Jan. 4 on surveillance video leaving a Lexington bar with two men. A third man was not seen on camera.

All three men have been questioned. Police say that the three deny having to do with her disappearance.

Spurlock’s mother, Ellen, told LEX 18 that Savannah’s phone last pinged in Garrard County. Her phone went out of service around 8:30 a.m. on the morning she disappeared. Search crews have searched lakes, ponds, farms, homes, and caves, without any luck

Since her disappearance, Savannah has missed her oldest son turning 4 years old, as well as her own 23rd birthday.

The $10,000 reward expires Wednesday, May 15. If you have any information, contact the Richmond Police Department. 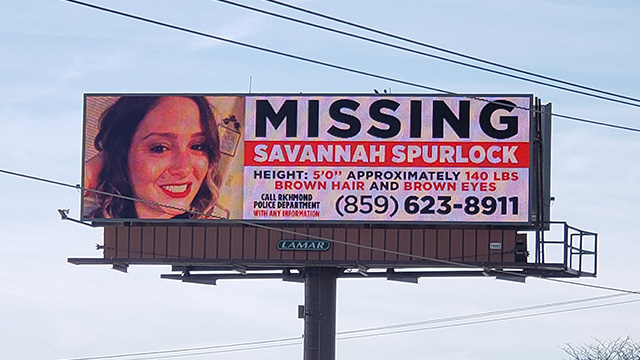