FLOYD COUNTY, Ky. (LEX 18)- Earlier this week, a scathing report was released by the Kentucky Department of Education saying that Betsy Layne Elementary in Floyd County cheated on their test scores for the K-PREP test for years.

The report also outlines how the school district placed hundreds of students in the school’s special education program when they did not need to be there. The report alleges those accommodations may have been made to boost test scores.

“Speculation tells me there was a culture here in the district that they were going to be number 1 across the–you know, test scores, attendance, the whole nine yards,” explained Adkins.

In a letter to LEX 18, former Superintendent Dr. Henry Webb said he had no knowledge of any intentional actions to undermine the integrity of the district.

But to achieve the “Kentucky District of Distinction” and “School of Distinction” ranking along with being recognized as a National Blue Ribbon School, the Kentucky Department of Education’s report released Monday shows that data may have been altered for attendance purposes at district schools using the code W07, indicating student withdrawal.

“…The withdrawal of students with that code is so far out of whack with any other district in the state that it causes great concern,” explained Dr. Wayne Lewis, the KDE commissioner. “They are withdrawing astronomical numbers of students.”

According to the report, the code was meant to be used for students who miss five or more days of school and have a doctor’s note. At its height in the 2016-2017 school years, Floyd County School District marked more than 1,400 students as “withdrawn” when the average for neighboring districts was 4.6 students.

The Superintendent said starting in the fall, a new system will include home visits when students have a long-term illness. But what was the motivation behind achieving outstanding attendance? The superintendent did say there may be a small financial benefit –but not enough to make a significant difference.

The graph below shows the number of students withdrawn in neighboring districts (blue) compared to Floyd County (red). 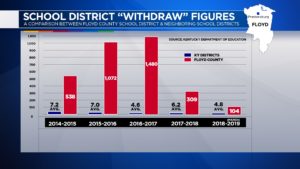