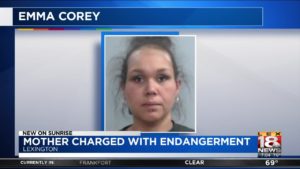 LEXINGTON, Ky. (LEX 18) — A Lexington woman reportedly told police she thought her 3-year-old daughter was playing hide-and-seek when instead the girl had wandered a half-mile from home.

Authorities were called to Cardinal Valley Elementary School after the girl walked to the school alone. The police report says the child walked a half-mile and crossed three intersections along the way.

Corey was being held in the Fayette County Detention Center on child endangerment charges.