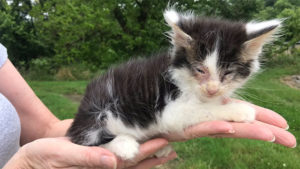 POWELL COUNTY, Ky. (LEX 18) – A kitten is recovering after he was found dumped on a country road.

Animal advocates say this happens all too often.

Teresa Stidham works part time at the Powell County Animal Shelter. She says her husband just happened to drive on a rural county road, and spotted the kitten.

“In the middle of the countryside, there was this little, tiny kitten. soaking wet, shriveled up,” said Stidham. “If he hadn’t been found, he would not have survived very long. Anything could have happened to him.”

Stidham cleaned him up and gave him some medicine to help his eyes. She says he should make a full recovery.

But even though this story may have a happy ending, Stidham says many do not.

“I think they’re looking for an immediate solution to their problem. But they don’t realize that it’s a problem for many people, and the pets pay the ultimate price. So many of them are not found,” said Stidham.

She says back at the shelter, animals are constantly being surrendered. Stidham encourages every pet owner to have their animals spayed or neutered.

“There’s so many programs in our area that are there in place to help anyone that wants help. All they have to do is reach out and find those programs,” said Stidham.