LEXINGTON, KY (Lex 18) – Wet weather has a number of Kentucky farmers feeling anxious about their corn crops this spring.

Experts say some farmers may make it out of the summer ok, but others could see major losses at the fall harvest. 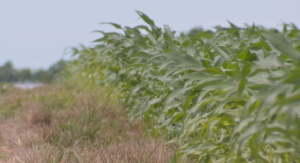 By now, the corn at UK’s Spindletop Farm should be shoulder high. Instead, it’s not even half that, and the reason is in the soil.

“Because this was planted a little too wet, these roots are constricted,” said Chad Lee, a UK extension professor. “As a result, this plant will never fully recover all season long.”

Professor Lee said that’s the problem many farmers in the midwest, including right here in the Bluegrass, are facing all because of a wet winter and spring.

Currently, the worst situation is in Indiana and Ohio.

Lee said that leads to two things – a late start to growing and less than ideal conditions. Because of that, some crops are already struggling and more susceptible to dry weather, which has farmers anxious.

“If July and August act like they historically do, that means we’re looking at somewhere around a 20-30 percent yield loss for growers in this part of the state,” Lee said.

Such an outcome would affect corn supplies for livestock, ethanol, food products, and bourbon. According to Lee, Central Kentucky produces about 20 percent of the State’s corn.

While consumers won’t likely be hurt, farmers will.

“They’ve been feeling an economic pinch for several years now, and when you can’t get a crop planted and you can get it planted it’s mentally very taxing,” Lee said. “So, it’s a very trying time for most producers.”

So once again, farmers have no control in an already unforgiving business.