Teenager OK After Fall From Cliff in Red River Gorge

POWELL COUNTY, KY (Lex 18) – A teenage hiker is lucky to only have minor injuries after falling from a cliff on Auxier Ridge Trail in the Red River Gorge Wednesday afternoon.

“His mom ran up to the top of the rock and was like, my son fell,” said Bethany Hamilton, a hiker. “So, me and my trip partner ran down there.”

Strangers were the first to jump into action. They soon found the 13-year-old boy writhing in pain more than 30 feet below a cliff. 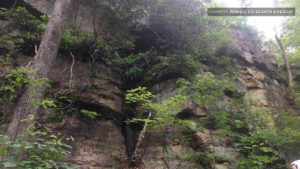 “The most concerning part was his arm but also just trying to keep him awake,” Hamilton said. “He was definitely in shock.”

Eventually, Powell County Search and Rescue and Tri-Community Fire and Rescue members came to get the boy to safety.

While the weather was clear when the boy fell, it did start raining while he was out there, which presented a new set of challenges for rescue teams.

“It makes it harder because you really have to be careful of the steps you’re taking because now it’s twice as slippery, twice as dangerous,” said Lisa Johnson with Powell County Search and Rescue. “With the rain we’ve had and the flooding, trees are loose, rockslides.”

Rescuers say it’s important you don’t take any risks while in the Gorge. Clifflines are dangerous, rain or shine.

“It just takes a second, just a second for you to fall and lose your balance,” Johnson said.

The teen was taken to the hospital to get checked out. Rescuers said he may have broken his wrist.

“He was really fortunate he didn’t die,” Hamilton said. “If he would have hit his head on the way down he would have been dead. I think God was watching over him for sure.”