There is one student going to the Marine Academy, two to the Naval Academy, one to the Air Force Academy and four to the Military Academy. One of the honorees was accepted to three!

Barr said it’s the highest number of students his district has sent since he has held his seat. This morning, he recognized each one of them, thanking them for their willingness to serve their country.

After introducing each appointee, @RepAndyBarr said he feels he doesn’t have a more important responsibility than appointing students like these to serve our country. @LEX18News pic.twitter.com/j1vAq4AkMz

“In this day and age, you know, you hear sometimes people are more critical of a certain generation or this generation or that generation, but what this tells me when you see these outstanding young people and their resumes and what they’ve already accomplished in their young lives and what they surely will accomplish in the military, it really gives you a great deal of inspiration and hope for the future of our country,” said Barr. 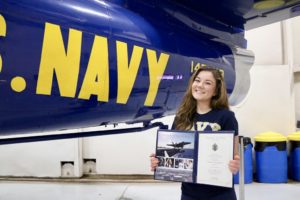 “I’ve been underestimated my whole life. I’ve had people come up to me this year, especially after articles have been released and they’re like ‘oh, you’re actually smart.’ And it’s a bit of a bash but their expectations for me were down here and then I raised the bar all the way up here so they’re this much more impressed,” she told LEX 18.

“It’s hard to get 8, I will tell you. It’s so competitive. Not just in Kentucky but nation-wide but I am very proud of the fact–and I share this with my colleagues in the US House, Kentucky is a particularly patriotic place. It’s a place of higher participation in the military and more interest among young people to serve,” said Barr.

Here are all the appointments honored. Congratulations to all the students and thank you for your service!