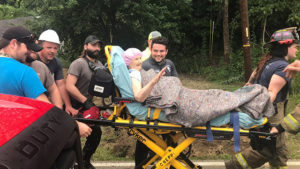 The Assistant Fire Chief Eddie Barnes told LEX 18 that the mountaintop slid and collapsed onto the woman’s Northbend Road home as she slept.

“Basically half the mountain came off behind that house and as rescuers were getting the victim out, we actually had two or three slides during that time,” he said.

The woman was found alive, and after hours of crews digging by hand, she is out.

She was taken to Clark Regional Medical Center around 10:30 a.m. Crews told LEX 18 that she “barely suffered a scratch.”

The American Red Cross is going to help the woman with her needs going forward. She also has several family members in the area she can stay with.