WHITLEY COUNTY, Ky. (LEX 18) – Police say that a man is accused of killing his aunt in Whitley County.

Williamsburg police say that the call originally came in to the sheriff’s department for a domestic dispute on Betty West Road at 7:53 a.m. A police officer was nearby and responded to the call. They say the officer found a woman lying partially in the yard and partially in the road, bleeding from her head.

Police say that Michael Worley was running away. He was arrested and taken to the Whitley County Detention Center. He was also taken to a hospital for x-rays of his hands.

He has been charged with murder in the case. Police say he also had outstanding warrants on him for contempt of court and shoplifting.

Police tell LEX 18 that the woman was severely beaten. At this time, there is no cause of death for her, but there was no immediate evidence of a gunshot wound. A weapon has also not been recovered.

Police say that the victim is  Michael’s aunt, 58-year-old Wanda Richardson. They tell LEX 18 they have been to the house before. 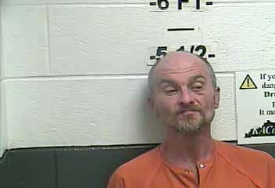