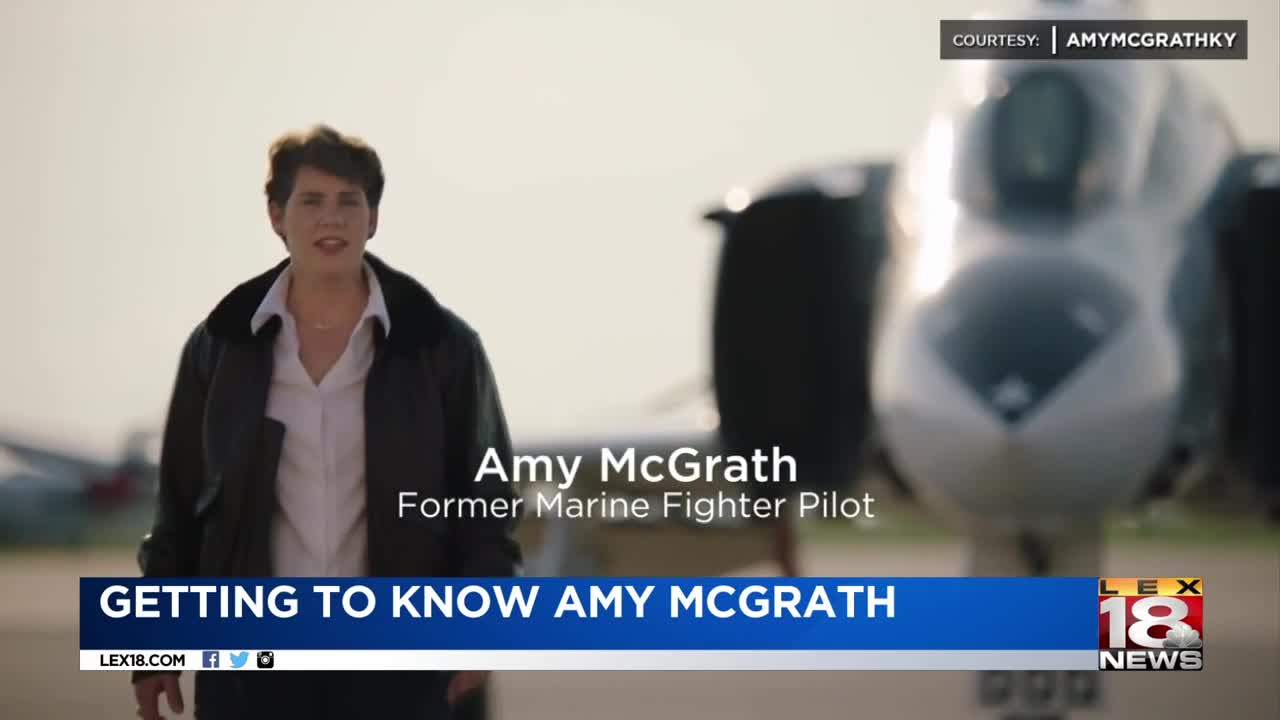 In 2017, Kentucky first met retired Marine Lt. Colonel Amy McGrath. At the time, she was running for Congress.

In her congressional campaign announcement video, titled "Told Me," fighter jets flew across the screen as McGrath told voters about her past.

"I spend 20 years as a U.S. Marine, flew 89 combat missions bombing al-Qaeda and the Taliban," narrated McGrath. "I was the first woman Marine to fly in an F/A-18 in combat, and I got to land on aircraft carriers."

In the May Primary, McGrath upset former Lexington Mayor Jim Gray by focusing on her message of putting the country before her political party. However, in November 2018, voters cast their ballots in the general election, and McGrath lost to Representative Andy Barr.

"I know we all hope he returns to Washington with a renewed sense of purpose," said McGrath in her concession speech.

"I was 13 years old, and I knew exactly what I wanted to do with my life. I sat at this table, and wrote a letter to my Senator telling him I wanted to fly fighter jets in combat, to fight for my country, and that women should be able to do that," narrated McGrath. "He never wrote back. I'm Amy McGrath, and I've often wondered how many other people did Mitch McConnell never take the time to write back."

The video was her campaign announcement as she entered the race for U.S. Senate.

"Everything that's wrong in Washington had to start someplace. How did it come to this? That even within our own families, we can't talk to each other about the leaders of our country anymore without anger and blame," narrated McGrath.

"I'm running for Senate because it shouldn't be like this," narrated McGrath as the video continued. "I learned as a daughter, a mom, a marine, and a fighter pilot that the mission can never be forgotten."

McGrath tries to connect to voters by showing videos of her family's morning routine. In a video titled "Mornings with Amy, Erik, and the Kids," McGrath is seen feeding, clothing, and dropping her children off at school.

McGrath is running her senate campaign on a moderate platform. She supports the Affordable Care Act but believes it falls short of where the health care system should be. However, unlike some of her Democrat challengers, she opposes Medicare-for-all.

In a one-on-one interview with LEX 18 News, McGrath says she supports a public option, Medicare buy-in, and lower prescription drug costs when it comes to healthcare.

"You can have an Uncle Sam plan that is not tied to your employer; that you could buy. You wouldn't have to be forced onto a government plan, but you could buy one if you wanted," said McGrath. "It just gives you another choice."

McGrath believes many people - both democrats and republicans - can get behind the idea of a public option because it provides Americans with more choice.

Another issue McGrath takes a more moderate approach to is post-secondary education. She believes student debt is a problem but doesn't believe free college is the solution.

Instead, McGrath prefers a national service plan. The plan would allow people to get a debt-free higher education in exchange for paid service back to their communities.

"I went to college through Uncle Sam, and I paid it back in service to my country. Now, not everybody should be in the military or can be in the military, and I understand that. But I think we should provide an opportunity where people can serve," said McGrath.

"I think that's fair," said McGrath. "Most Americans want some sort of fair deal, and that's what I would be for."

McGrath is also focusing on securing Kentucky's economy as a big part of her platform. She believes Kentucky needs to do three things to secure quality jobs in the state.

The first is investing in education and training for the workforce. McGrath believes new jobs require a higher level of education, so the workforce needs training in Kentucky to qualify for these jobs.

The second part of McGrath's plan is to improve healthcare. Specifically, help communities struggling with the opioid crisis. McGrath believes this is a key component because employers want a healthy, secure workforce.

McGrath also wants to invest in new infrastructures, like roads and bridges, and accessible broadband.

"No business is going to want to come to a county in Kentucky that cannot talk to the modern world. We are not going back to 1960. The globalized world that has happened - it's happening. Businesses have to talk to the modern world to thrive, and that means broadband. That means cellphone coverage," said McGrath. "I've talked to businesses who want to restructure here in Kentucky; they want to go to a county, they fly into Bluegrass Airport, they drive 25 minutes to the east, they lose cellphone coverage, and guess what they do? They turn right around and go back to the airport, and go to one of the other eight places in the country that have infrastructure."

McGrath has raised millions of dollars for her senate run, showing she has support behind her ideas. However, her primary challengers believe groups in Washington, D.C. are influencing this race.

Mike Broihier and Charles Booker have both said that Washington Democrats had selected McGrath as Kentucky's candidate. When asked about the criticism, McGrath said the election is up to the voters.

"First of all, you remember last cycle, the party didn't want anything to do with me, and that didn't matter. This is our democracy. Voters are going to decide. Voters are going to decide who has common sense, who is the person that is best suited to take on Mitch McConnell," said McGrath. "I'm really proud of our campaign. Within the first few weeks of our campaign, we had contributions from all 120 counties in Kentucky."

Some progressive Democrats also criticize McGrath for her willingness to work with President Donald Trump. But McGrath said she would work with anyone to help Kentucky.

"I took an oath to the Constitution to the United States six times in my life. I take it very seriously, and as Senator, I would take that oath again to the Constitution. My job would be to represent the people of Kentucky and to stand for Kentucky," said McGrath.