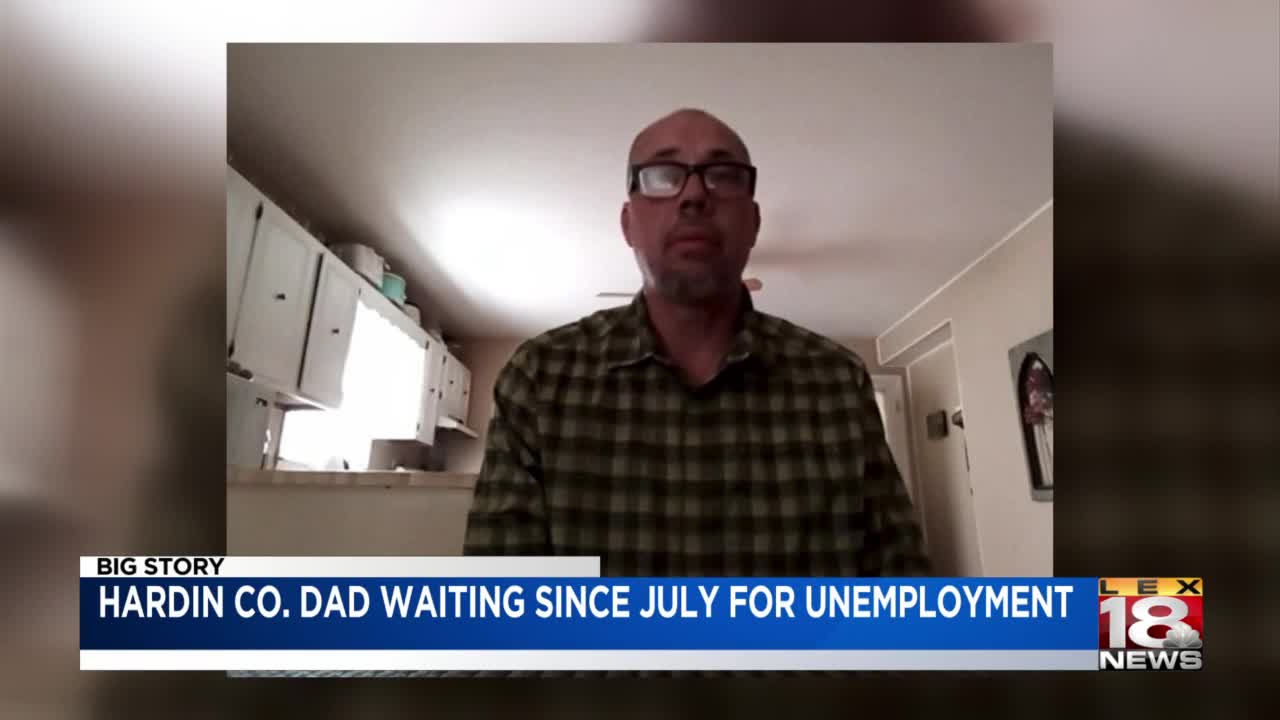 HARDIN COUNTY, Ky (LEX 18) — It has been nearly two months since a Hardin County man filed for unemployment in Kentucky, and he has yet to receive his first check or confirmation he will receive unemployment benefits.

A recent widower and a father of four, James Miller said it already has been a challenging year. But he's been doing everything he can to keep life "normal" for his family.

"From what I've been told my entire life, three months' worth of savings is your safety net," Miller said. "It's what you're supposed to have."

He added that unemployment benefits add to that safety net now that the pandemic has run well over the budgeted three months of savings.

Miller worked in the restaurant management business for 30 years, but his day-to-day routine looks much different since filing for unemployment in July.

"I spend the first part of my morning working on unemployment," he said. "I spend the next half of my afternoon looking for work. And it's an everyday process that I try to call the unemployment office."

Miller calls two separate numbers to inquire about his benefits. Each time, he said, he gets put in a queue.

"I've not gotten one call back from the queue since July," he said.

Miller said he also placed calls to the offices of local government officials, which allowed him to be added to a "critical" list. But the placement still did not translate into results.

"I've sent multiple, multiple emails. You never get a response," he said. "On the off day that you can get ahold of somebody in-person on the (unemployment insurance) hotline, it's usually a tier-two person, and they can't do anything except say, 'We're going to send this on to tier three, and I'll get back with you.' And that's sort of where you're left out -- you're just left in limbo forever."

After battling the system for nearly two months, and knowing others have been struggling to get answers for far longer, Miller said he is shocked the state has not made a change.

"It's just not right. They need to fix the system," he said. "This is the frustrating part, to me, is that this all happened in March. The state of Kentucky has known about this since March that the unemployment system is critically outdated. Six months later, why haven't they did anything to replace that system?"

Kentucky has hired accounting firm Ernst & Young to assist with the hundreds of thousands of unemployment claims, but Kentuckians continue to tell LEX 18 not much has changed since they were hired.

"I understand the unemployment workers are working their hardest, but they're overwhelmed too," Miller said. "But, at some point in time, something's got to give. And to be honest with you, I'm not in as worse shape as a lot of people out there."

As he continues to fall behind on payments and his credit score continues to drop, Miller said he is in jeopardy of losing everything he has worked so hard for.

And for the sake of all Kentuckians, Miller said the fix needs to come sooner rather than later.

"Normal things that I supply for my children are suffering right now, you know, school clothes," he said. "Stuff like that that you don't think about," Miller said. "I need to pay insurance on my car I need -- I don't know, bills just stack up. They stack up and they stack up."