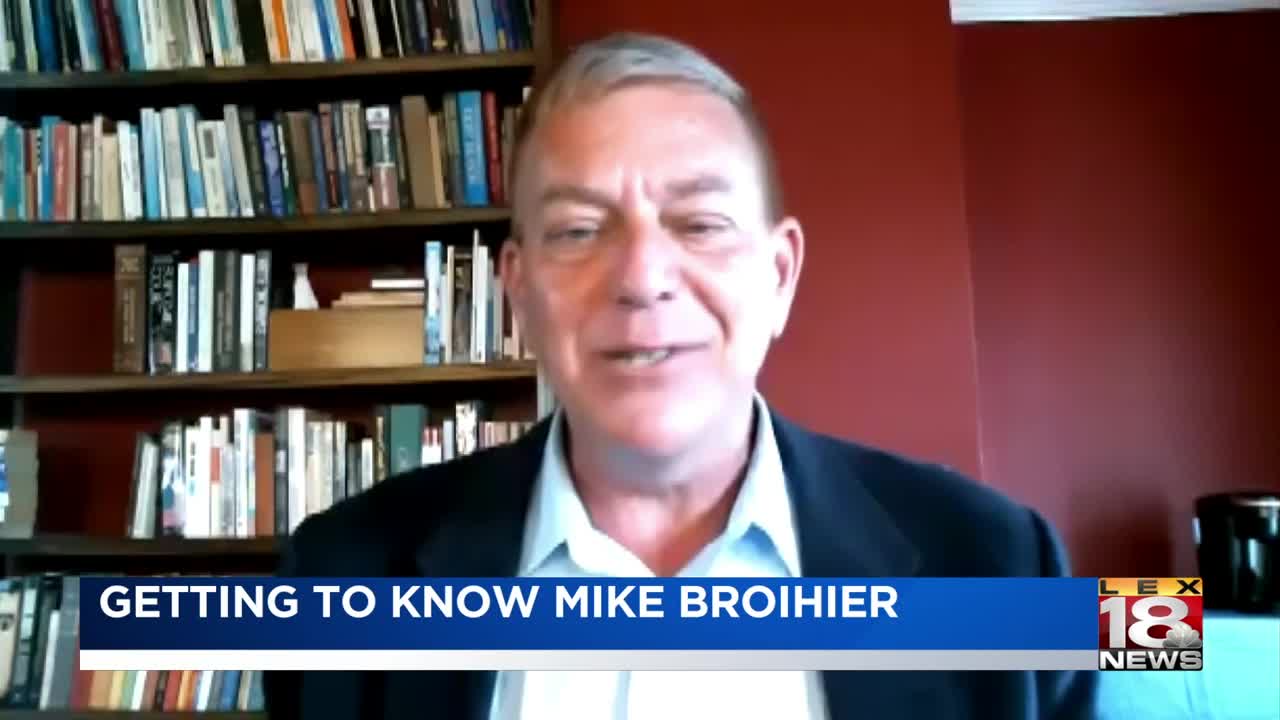 LINCOLN COUNTY, Ky. (LEX 18) — If you follow Mike Broihier on social media, you may stumble across selfie-style videos featuring a man in coveralls and a farmer's hat. That man is Broihier, and he is running for a seat in the U.S. Senate while simultaneously running his asparagus farm in Lincoln County.

"Hey, everybody. Mike Broihier here checking in from the Chicken Bristle Farm," Broihier said as he began his video.

Broihier's YouTube is a mix of homemade recordings and professionally crafted campaign videos.

In one of his first videos, titled "Mike's Story," he introduced himself to voters. That's where he reveals he's not just an asparagus farmer. He's also a retired Marine lieutenant colonel, a substitute teacher, a former rural newspaper editor and a husband to a marine.

And now, he wants to be a U.S. Senator. Specifically, he's running for the position currently held by Senate Majority Leader Mitch McConnell.

Broihier says he is running for public office because he wants to uphold the Constitution and believes it is not currently happening in Washington, D.C.

"I think it goes back to, fundamentally, the oath of office you take as a military officer to defend the Constitution. I, frankly, saw what was happening in Washington as being dangerously unconstitutional," said Broihier in an almost hour-long interview with LEX 18 News.

Watch an extended interview with Mike Broihier below:

Broihier is running on a progressive platform. He supports Medicare-for-all, an increase in minimum wage, student loan forgiveness for public service jobs, and universal basic income.

Universal basic income is a guaranteed payment given to every American each month. Broihier wants to give every adult $2,000 per month and every child $1,000 per month throughout the financial crisis caused by COVID-19. He says after the pandemic recession ends, the country should transition to a monthly payment of $1,200 for every adult and $400 for each child.

"What would your life be like if you had another $1,200 a month?" asked Broihier.

He believes the additional money will help people survive and pursue jobs that make them happier.

"What I like about universal basic income is it's - I like to say - the freedom to say no and the power to say yes," said Broihier. "You don't have to be stuck in a job that you don't like or is poorly compensated because that's where your healthcare [is from], or it's the only thing that you can do where you live. It lets you take a job that may pay less, but might be one that causes you great happiness - whether it's working at your public library, or volunteering at your school district. The nice thing about UBI is it values all work."

Broihier says the federal government already did something similar when it sent checks to all Americans as part of the coronavirus relief effort. That, however, was a one-time check. Broihier wants Americans to get checks every month. He says other countries do it, and there are examples within the United States as well.

"It's not a foreign concept in the United States. They've been doing it in Alaska. They've been getting basic income in Alaska since the 80s," said Broihier. "They started building a fund back in the 1950s by charging people to use the Alaskan waters for fishing, and then when we started extracting oil and gas, they had to pay to this fund - which is now self-sustaining. Every person in Alaska gets a check every month, and no one calls it welfare because it's a self-sustaining system."

Critics of universal basic income often argue the concept is a handout. But Broihier says it will allow people to live better lives.

"What it does is allow people to pursue the things that they like and love and make them happy, which is something that is promised to us - life, liberty, and the pursuit of happiness," said Broihier.

Last week, Yang endorsed Broihier for Senate. Some of his former staffers even work for Broihier.

"They literally just started showing up here at the farm," said Broihier. "It got so full here at one point; our neighbor pulled a leaky, old Winnebago over into the yard. One of the young guys had to sleep out in the Winnebago because there was no room in the house."

The team has helped Broihier figure out how to campaign in the middle of a pandemic.

"As a rural newspaper guy myself, I know that people in the counties, when they say 'the paper,' they're not talking about the Washington Post or the New York Times. They're talking about their rural weekly," said Broihier. "I'll do two, three, four interviews a day with rural weeklies."

Broihier faces a tough primary ahead of him. Some national political circles consider him the long-shot candidate. On June 23, he's up against other Democrats, like Amy McGrath, who has raised millions of dollars for her campaign.

"You fight at the grassroots," said Broihier. "Take a look at how we got rid of Matt Bevin. It was grassroots. It was teachers. It was Indivisible. It was as door knockers, phone bankers, the texters."

"[Indivisible Kentucky] are people who are movers and shakers of grassroots campaigns, and they've all given me their endorsement, and they don't care how much money the other candidate has," said Broihier. "And frankly, I think they're a little bit bothered by the fact that someone in Washington has chosen who their candidate is supposed to be."

Broihier hopes his policies will earn him a primary win and the chance to face Senator McConnell in November.

"People always say sum up your campaign in three sentences. I always tell them I can do it in six words: social and economic justice for all. And by all, I mean all. All race, creed, color, sexual orientation, gender identity," said Broihier. "This country has been founded on justice, and in every opportunity, people have spent their time and energy trying to deny equality and justice to others. It's time for that to change."