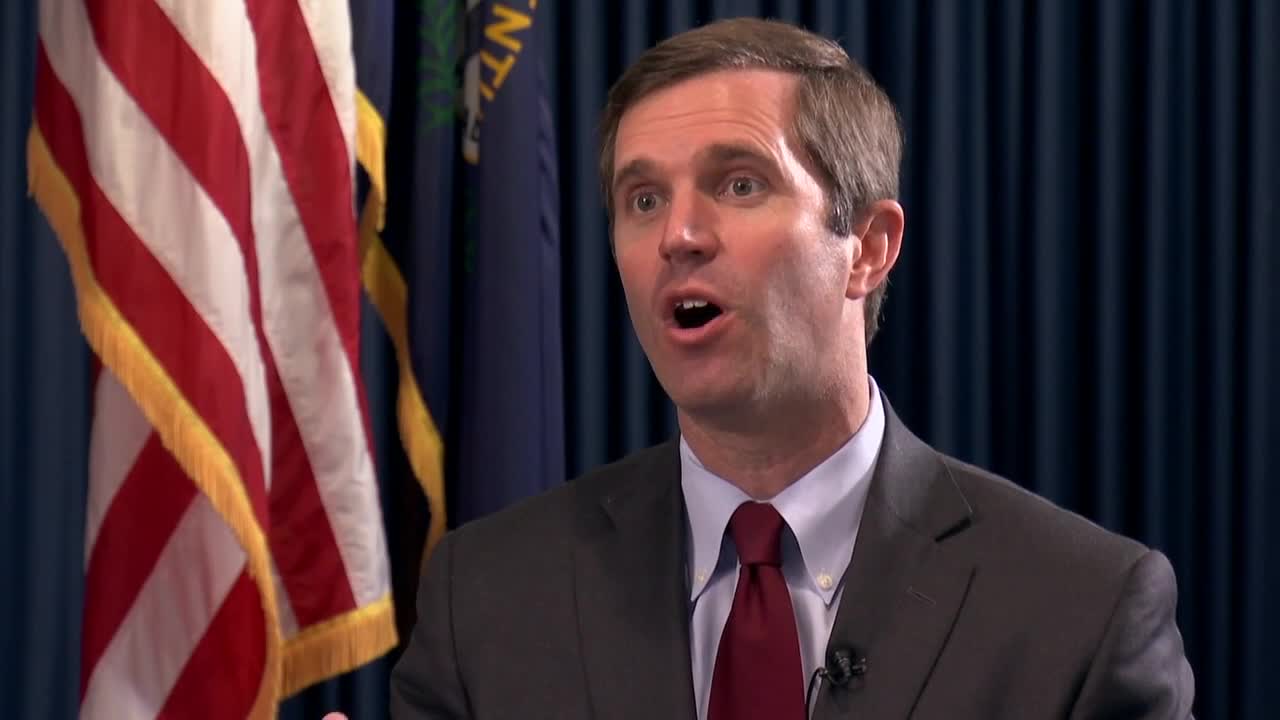 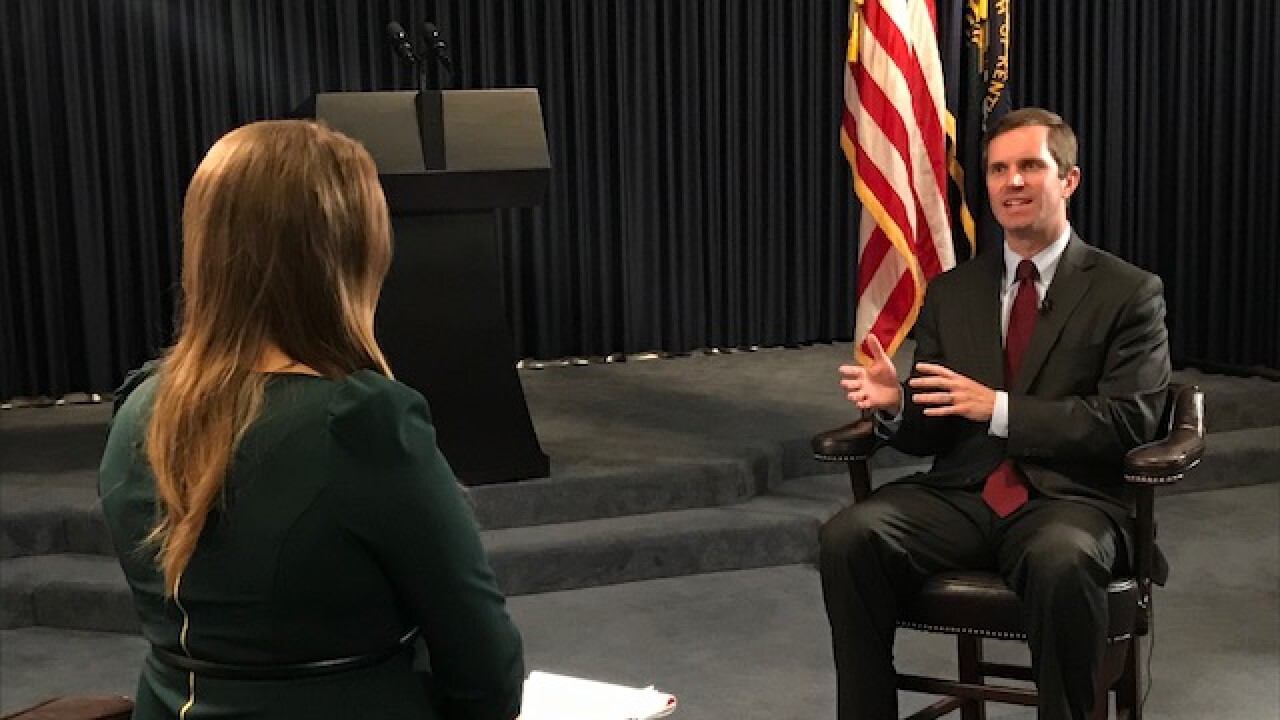 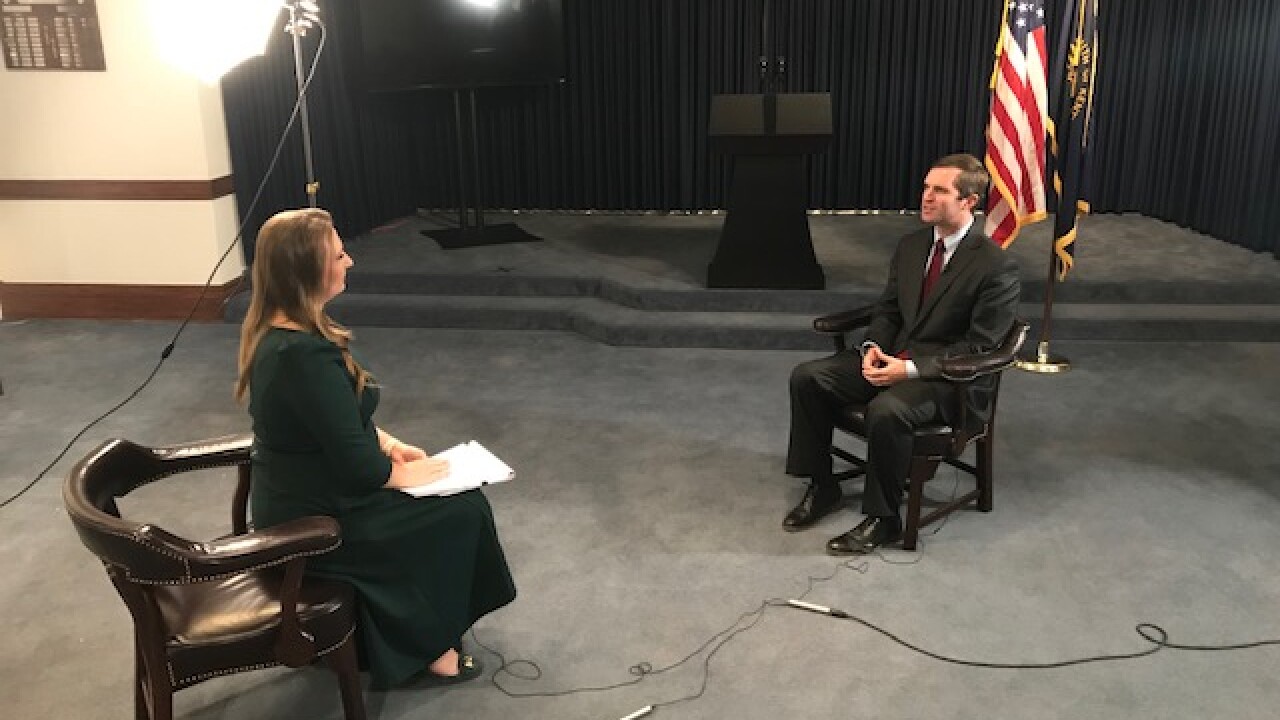 FRANKFORT, Ky. (LEX 18) — People know him as an attorney general and as a candidate on the campaign trail. However, two weeks from now, they'll know him as Gov. Andy Beshear.

On Monday, for the first time since he won the election, Beshear sat down with LEX 18 for a one-on-one interview. He answered questions on topics Kentucky is facing. One of those topics is the fight over public education.

During the campaign, Beshear made big promises like an across-the-board raise for public school teachers, better funding for public schools and protecting teachers' pensions. However, his critics have questioned whether he can deliver on these promises. So, that's what we asked him. How will he fulfill his promises with the money that Kentucky has?

"We're going to look at revenue options, but to me, a budget is a values document," said Beshear. "Even if we have more revenue, there's never going to be enough for everything we need. So the question is: 'What do we, as Kentuckians, value most?' And that has to start with public education. It has to start with every child that's in that system... better and more opportunity. That's how we invest in our future, which are those kids in the classroom."

While Beshear's supporters stand by his stance on public education, critics point out that Beshear's children do not attend public school. However, Beshear said that was out of necessity for preschool.

"My kids had an amazing opportunity to do what ever child in Kentucky should do, which is go to preschool. I mean, we have so many kids that come in that aren't kindergarten ready, that often times they're behind and they may not catch up," Beshear said. "So, we did what most people have to do, which is to go to a private preschool. It had a K through 5 and it was one that really fit our family, and welcomed and loved our kids. I'm always going to do what's best for my kids, which everybody else is going to do. But, my son will be going to a public middle school next year. I pay my property taxes every single year happily and I am a huge supporter of public education."

While public education is one topic Beshear and some republican lawmakers disagree on, there are others as well. So, how will Beshear, a democratic governor, work with Kentucky's lawmakers?

"There's going to be disagreement. I mean, that happens. Our government is based on conflict, at least in part, and that's supposed to help us come to better decisions," said Beshear. "It's how we deal with the conflict that is so important. It may be on day four, we're arguing about something that we disagree on, but if we do it in the right way - if we disagree without being disagreeable, without being personal and without being nasty - it lets us come back on day five and work on something that we all agree on."

While Beshear is optimistic about getting things done in a civil manner, he knows there will be challenges that make things tense at times.

One of those challenges may be legislation on abortion. Beshear said he is pro-choice, while there are many lawmakers who are pro-life.

"I've been very clear that I support Roe v. Wade, but I also support reasonable restrictions, especially on late term procedures," said Beshear. "But, there's some ground that we all ought to be able to agree on, and those deal with victims of rape and incest."

Another big topic that may cause disagreement is casino gambling. Beshear wants to legalize it and use the money from it to help fund the pension system. However, some lawmakers made it clear they would not support such legislation.

"I believe that, over the long run, people will see that this is just money that we are losing to other states," Beshear said. "That every single state around us has some form of gamin and we are simply giving our tax dollars away to them, and by not doing it, we're going to face harder decisions."

If you want to watch the whole interview with Beshear, watch above.