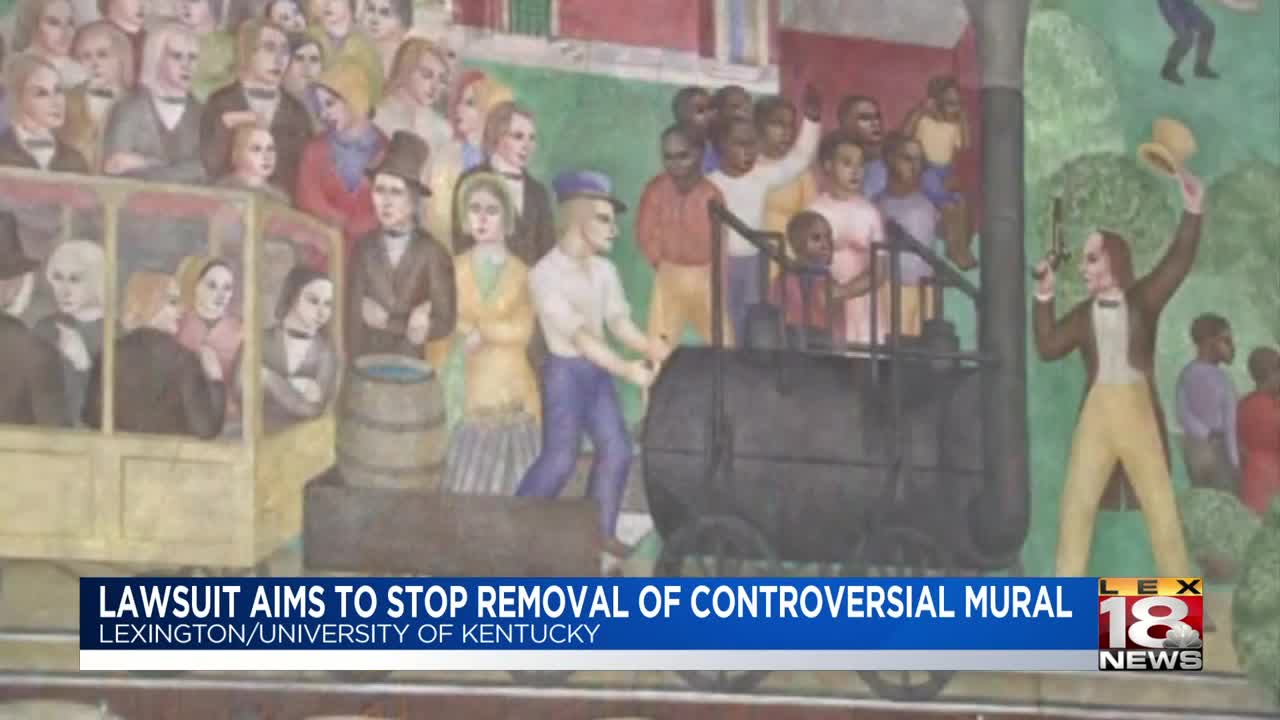 LEXINGTON, Ky. (LEX 18) — After years of simmering debate, the controversial mural in the University of Kentucky's Memorial Hall will be removed, according to university officials.

In an effort to halt that process, writer Wendell Berry and his wife, Tanya Berry, sued the university Monday morning. Tanya is the niece of Ann Rice O'Hanlon, the muralist.

"I can't, in conscious, sit by while that fresco is destroyed," Berry said in a phone interview with LEX 18.

The lawsuit argues that the mural was created through a government program and it is owned by the people of Kentucky. Therefore, President Eli Capiluoto does not have the right to make a decision to remove it.

"I am not willing to ignore any effort at all to destroy a work of art," Berry said.

The mural isn't the only artwork that would be affected by its removal. In 2018, UK commissioned artist, Karyn Olivier, to create a companion piece designed to confront the problematic mural and spark a dialogue. She said it can be used as a tool to understand our complicated history.

Her piece reproduces the images of the African slaves and places them in a gold leafed dome in order to elevate them to the divine and reinforce the notion or possibility of rebirth.

However, she said the artwork, titled "Witness", wouldn't work without the mural.

"My piece becomes mute," Olivier said. "It's rendered void, in a way. It can't work without the past it seeks to confront. That means my piece is just over. It doesn't work on its own."

She also called the motivation behind the university's decision misguided.

"The idea to remove the mural seems to me like a BandAid," Olivier said. "It's a quick deed to quell the fury and rage people are feeling."

Olivier said she also takes issue with the fact that she was not notified of the decision to remove the mural ahead of time. Instead, she learned about it in media reports.

"I was brought in as a black artist to make this work and in this decision, I was censored and left out of the equation," Olivier said.

She also questioned whether the removal would run counter to the university's purpose to stimulate complex conversations.

"I understand that taking down the mural can feel like this quick, concrete gesture, but I go back to the fact that my piece was not made to absolve the University of Kentucky of the wrongs," Olivier said. "It wasn't meant to absolve them of the white supremacy that they are apart of or tie the race problem in a neat bow. The idea was, now that the piece was made, how do we use it? how do we dissect it? How do we wrestle and rub up against the parts of it that are still problematic and we don't agree with? That's the purpose of higher education."

The lawyer representing Berry in the case, Scott White, raised the same questions and laments the fact that the mural's removal would mean that Olivier would be, in effect, silenced.

White also said the mural and Olivier's companion piece are exactly what the community needs in this moment of reckoning.

"The true healing, we would argue, is dealing with reality," White said. "This space [Memorial Hall] gives us that venue to do it."

In an email, a spokesman for the University of Kentucky responded to the lawsuit.

"Our respect for Wendell Berry is deep and abiding. His contributions to our state and literature are profound. Moving art, however, is not erasing history. It is, rather, creating context to further dialogue as well as space for healing. As President Capilouto wrote to our campus last month, after years of community conversation, 'our efforts and solutions with the mural, for many of our students, have been a roadblock to reconciliation, rather than a path toward healing.' That's not a criticism. It is a statement of fact and, I hope, understanding. We need to move forward."

White said he hopes to get in front of a judge in the next few weeks to get a temporary injunction to halt the removal process.

In the meantime, he said he welcomes a conversation with the University of Kentucky to work out a solution.