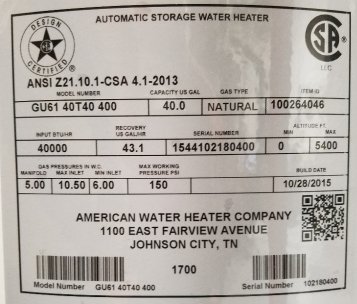 (LEX 18) — More than 600,000 water heater units are being recalled due to a problem that has caused six fires, according to the U.S. Product Safety Commission.

The agency says owners should immediately turn off the 30-, 40- and 50-gallon gas-fired Ultra-Low NOx water heaters made by Milwaukee, Wisconsin-based A.O. Smith Corp.

In addition to A.O. Smith, the units were sold under Kenmore, Reliance, State, U.S. Craftsmaster and Whirlpool brand names. The recall covers about 616,000 units.

According to the agency, a screen around the gas burner can develop tears, which can allow excess heat to radiate from the units and potentially ignite nearby material.

Consumers are encouraged to check the serial numbers to see if the unit is being recalled.