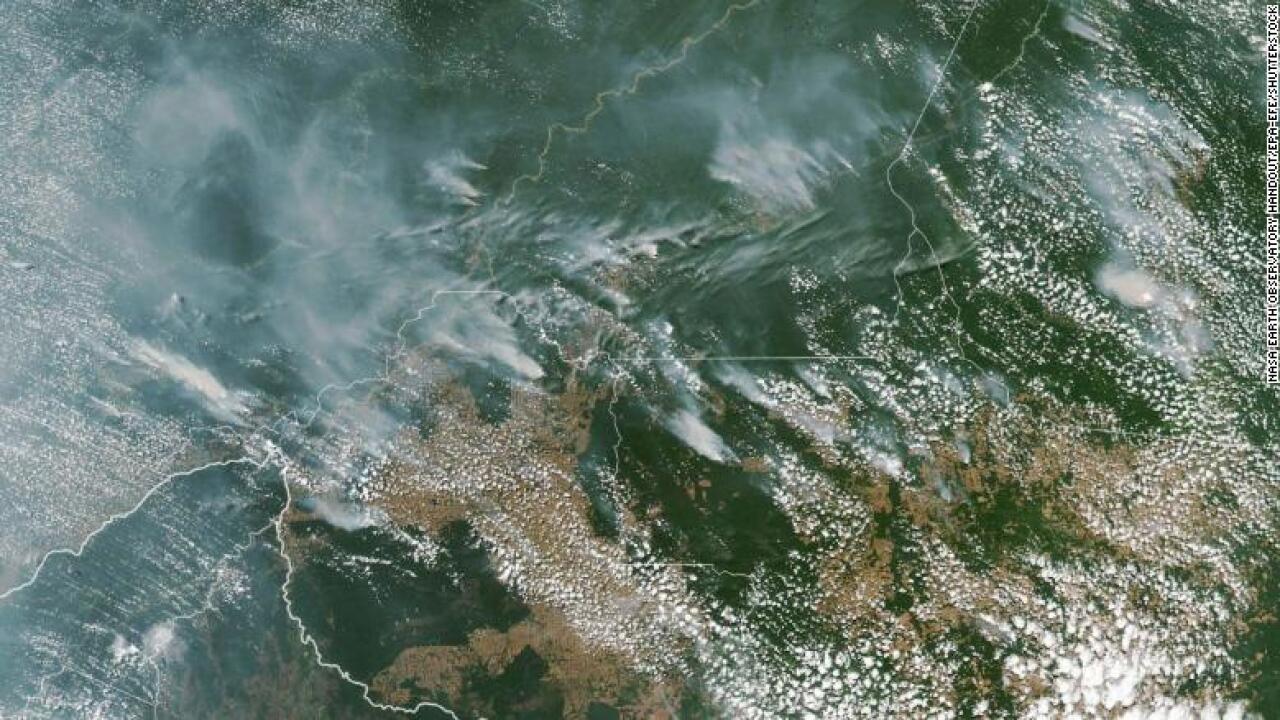 (CNN) — Fires are raging at a record rate in Brazil's Amazon rainforest, and scientists warn it could strike a devastating blow to the fight against climate change.

The fires are burning at the highest rate since the country's space research center, the National Institute for Space Research (INPE), began tracking them in 2013, the center said Tuesday.

There have been a total of 72,843 fires in Brazil this year, with more than half in the Amazon region, INPE said. That's more than an 80% increase compared with the same period last year.

The Amazon is often referred to as the planet's lungs, producing 20% of the oxygen in the earth's atmosphere.It is considered vital in slowing global warming, and it is also home to uncountable species of fauna and flora. Roughly half the size of the U.S., it is the largest rainforest on the planet.

🌎Just a little alert to the world: the sky randomly turned dark today in São Paulo, and meteorologists believe it’s smoke from the fires burning *thousands* of kilometers away, in Rondônia or Paraguay. Imagine how much has to be burning to create that much smoke(!). SOS🌎 pic.twitter.com/P1DrCzQO6x

Dramatic images and videos on social media show giant plumes of smoke rising from the greenery, and lines of fire leaving blackened waste in their wake.

The smoke has reached all the way to Sao Paolo, more than 1,700 miles away. Images from the city show the sky pitch black in the middle of the afternoon, the sky and sun blanketed by smoke and ash.The European Union's satellite program, Copernicus, released a map showing smoke from the fires spreading all along Brazil to the east Atlantic coast. The smoke has covered nearly half the entire country, and is even spilling over into neighboring Peru, Bolivia and Paraguayy.

From the other side of Earth, here’s the latest on the Amazonia fires 🌳

The Amazon river stretches across several of these South American countries, but the majority -- more than two-thirds -- of the rainforest lies in Brazil.According to the INPE, more than one and a half soccer fields of Amazon rainforest are being destroyed every minute of every day.

People worldwide are sharing their horror on social media. Fans of the K-Pop band BTS, who call themselves the Army, are even rallying on Twitter to spread word of the fires, with tens of thousands of people tweeting the hashtag #ArmyHelpThePlanet.

Environmental groups have long been campaigning to save the Amazon, blaming Brazil's far-right president, Jair Bolsonaro, for the endangerment of the vital rainforest.

They accuse him of relaxing environmental controls in the country and encouraging deforestation.

Bolsonaro's environmental policies have been controversial from the start. A former army captain, he made campaign promises to restore the country's economy by exploring the Amazon's economic potential.

Just weeks ago, the director of INPE was fired after a spat with the president -- the director had defended satellite data that showed deforestation was 88% higher in June than a year earlier, and Bolsonaro called the findings "lies."

Budget cuts and federal interference are making it even easier for people to exploit the rainforest. Brazil's environmental enforcement agency has seen its budget cut by $23 million, and official data sent to CNN by Observatorio do Clima shows the enforcement agency's operations have gone down since Bolsonaro was sworn in.

In July, Greenpeace called Bolsonaro and his government a "threat to the climate equilibrium" and warned that in the long run, his policies would bear a "heavy cost" for the Brazilian economy. Environmental activists and organizations like the World Wildlife Fund (WWF) warn that if the Amazon reaches a point of no return, the rainforest could become a dry savannah, no longer habitable for much of its wildlife. If this happens, instead of being a source of oxygen, it could start emitting carbon -- the major driver of climate change.