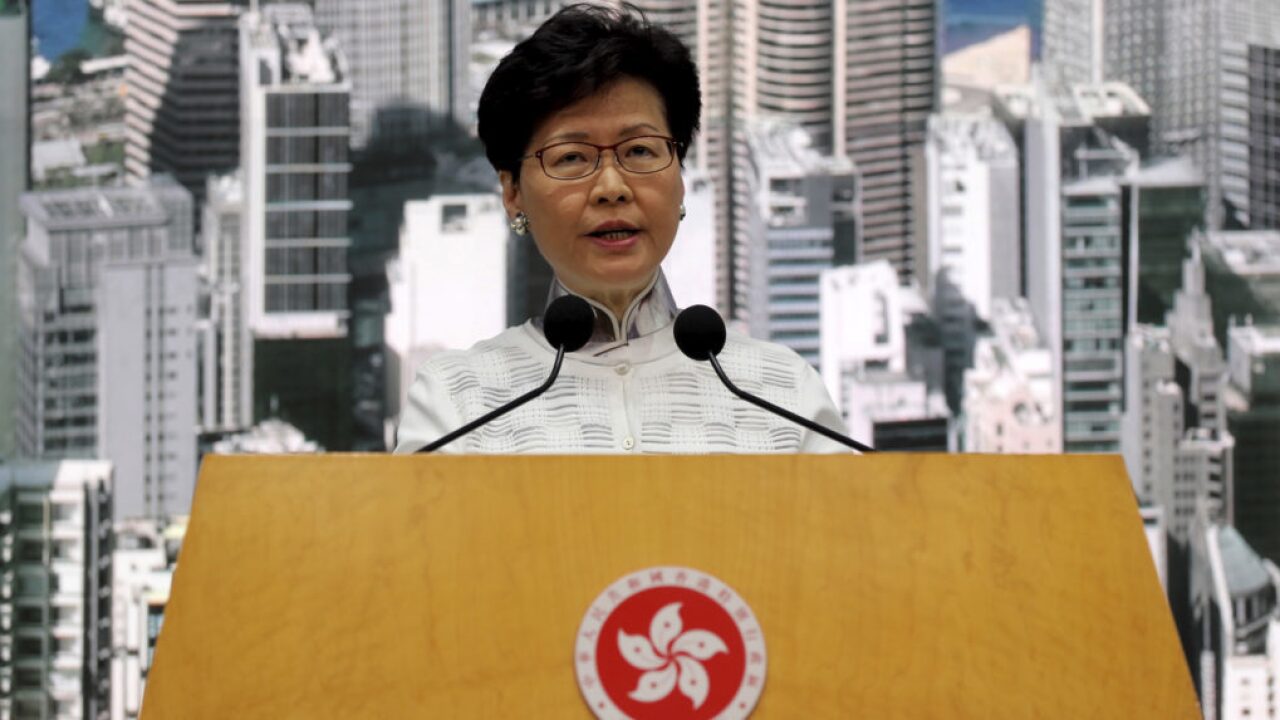 Hong Kong’s Chief Executive Carrie Lam speaks at a press conference in Hong Kong Saturday, June 15, 2019. Lam said she will suspend a proposed extradition bill indefinitely in response to widespread public unhappiness over the measure, which would enable authorities to send some suspects to stand trial in mainland courts. (AP Photo/Kin Cheung)

HONG KONG (AP) — Hong Kong Chief Executive Carrie Lam announced Wednesday the government will formally withdraw an extradition bill that sparked months of demonstrations, bowing to one of the protesters' demands in the hope of ending the increasingly violent unrest.

But a pro-government lawmaker warned that the bill's withdrawal was not enough to end the protests, which have increasingly focused on greater democracy and demands for Lam's resignation.

The bill would have allowed Hong Kong residents to be sent to mainland China for trials. It prompted massive protests since June and caused the airport to shut down earlier this month.

Lam said the government would not accept other demands, including an independent inquiry into alleged police misconduct against protesters and the unconditional release of those detained. Instead, she named two new members to a police watchdog agency investigating the matter.

"The government will formally withdraw the bill in order to fully allay public concerns," she said in a recorded television message.

"Our foremost priority now is to end violence, to safeguard the rule of law and to restore order and safety in society. As such, the government has to strictly enforce the law against all violent and illegal acts," she said.

Lam said it was clear that public frustration has gone far beyond the bill and that her government will seek a dialogue with aggrieved groups to "address the discontent in society and to look for solutions."

She said she will also invite community leaders, professionals and academics to examine deep-seated problems in the society and advise the government on solutions.

"Let's replace conflicts with conversations, and let's look for solutions," she said.

Lam made the announcement after meeting with pro-government lawmakers and members of the National People's Congress and the Chinese People's Political Consultative Conference.

Lawmaker Michael Tien, who was at the meeting, said the withdrawal of the bill would not change public sentiment if it isn't accompanied by other concessions, especially an independent inquiry into alleged police misconduct.

"It is too little, too late. The focus now has completely shifted. Most people do not remember what the bill is about but are more concerned about the escalating violence and alleged police heavy-handedness against protesters," he said.

The Hong Kong stock market soared 4%, boosted by reports of the bill withdrawal.

Lam has come under withering criticism for pushing the extradition bill, which many in Hong Kong see as an example of the city's eroding autonomy since the former British colony returned to Chinese control in 1997.

She was elected as Hong Kong's chief executive by a pro-Beijing committee of Hong Kong elites, and the mainland government has spoken in support of her government and the city's police force throughout the protests.

Clashes between police and protesters have become increasingly violent, with demonstrators throwing gasoline bombs and rods at officers in protests last weekend. Authorities in turn have employed water cannons, tear gas, rubber bullets and batons. More than 1,100 people have been detained.

The mostly young protesters say that a degree of violence is necessary to get the government's attention after peaceful rallies were futile. Lam's administration says the violence must end before any dialogue can begin.

In Beijing, the mainland office responsible for Hong Kong slammed the escalating violence and warned that China will "not sit idly by" if the situation worsens.

The prolonged protests have hurt Hong Kong's economy amid a slowdown in the Chinese economy and its trade war with the United States.

Hong Kong and foreign companies have also been under intense pressure to support China's ruling Communist Party against the protesters.

On Wednesday, the chairman of Hong Kong's Cathay Pacific Airways resigned, becoming the second top figure to leave the airline since the protests erupted.

Cathay said John Slosar was retiring from the airline, one of Hong Kong's most prominent businesses.

The announcement comes less than one month after Cathay's CEO, Rupert Hogg, resigned following pressure by Beijing over participation by some of the carrier's employees in protests.