LEXINGTON, Ky. (LEX 18)– Police say that while a homeowner was in the process of moving out and having some work done to their home, several expensive items were stolen from them.

“A large, flat screen 60-inch television, three Nintendo D.S. game systems, and then about 50 games to go with that, and a Nintendo Wii as well,” said Detective Mark Thomas with the Lexington Police Department.

The homeowner also started to receive notifications from a bank that their checks had been trying to be cashed. Thomas said that the thieves were able to cash the checks the first time. They were caught on camera the second time.

Investigators said they have learned that the thieves used stolen IDs to cash the checks. Those IDs were apparently from a prior theft.

“We do know that these people are not just responsible for this burglary, but they’ve also been responsible for other thefts as well, or how else would they have gotten their hands on these stolen identifications?” Thomas said. 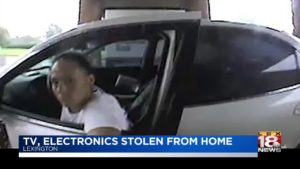