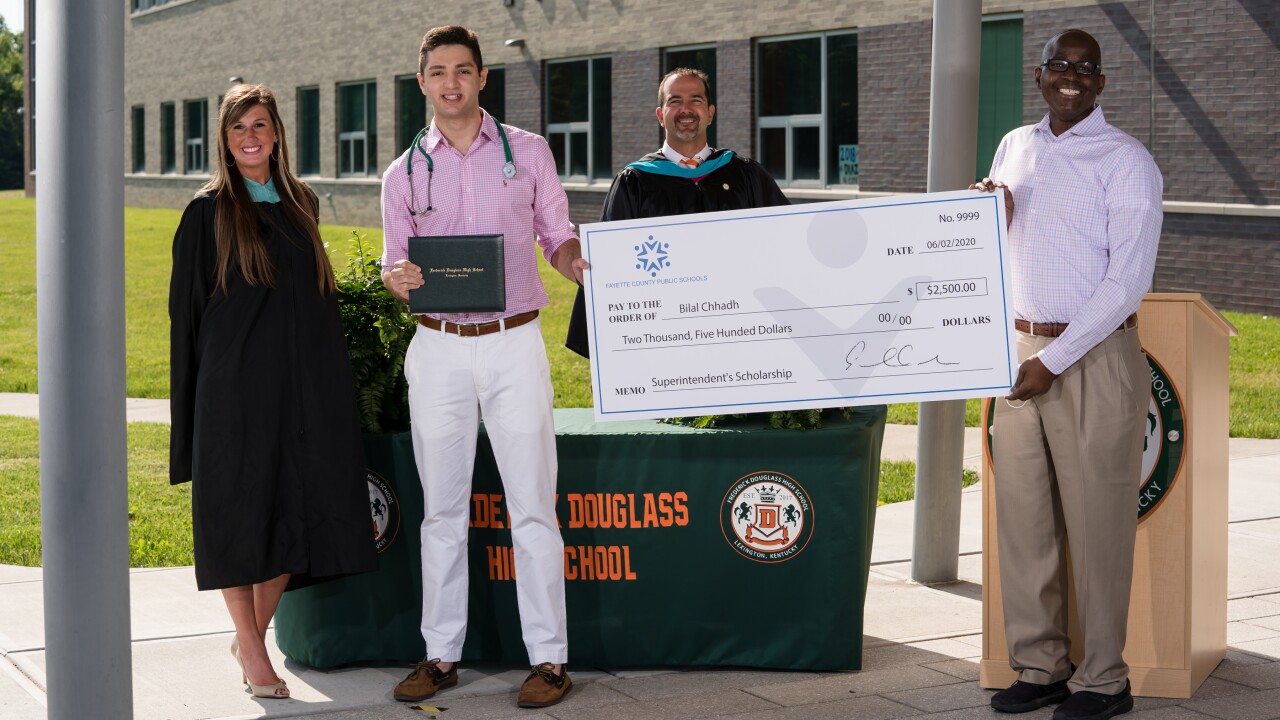 LEXINGTON, Ky. (LEX 18) — One Frederick Douglass High School student picked up more than just his diploma during his school’s drive through graduation ceremony this month.

After posing for a picture with FDHS Principal Lester Diaz, Bilal Chhadh was headed back to his family’s car when Fayette County Public Schools Superintendent Manny Caulk stopped him.

“Hang on, Bilal. I have something for you,” Caulk said, before revealing a seven-foot scholarship check made out to the senior for $2,500.

“Honestly, it was one of the most surprising moments of my life,” Chhadh reflected. “It was so unexpected. Graduation was already different, the class of 2020 had already given up so much. To have something to fill in that void with joy was kind of amazing.”

When Caulk was named the 2019 Kentucky Superintendent of the Year, part of his award included a one-time student scholarship funded by American Fidelity. When he announced the 2019 winner during last year’s state of the schools address, Caulk pledged to personally fund an annual scholarship as long as he serves as superintendent in Fayette County Public Schools.

“This young man was a sophomore when we opened Frederick Douglass High School and although he had the option to stay at Henry Clay High School, Bilal saw opportunity with a transition to FDHS,” Caulk said. “He jumped at the chance to enroll in the Medical Sciences Academy and Project Lead The Way Biomedical Sciences Magnet Program to provide him a springboard to his career goal of attending medical school to become an orthopedic surgeon.”

As part of those programs, Chhadh has taken a heavy course load of college-level and Advanced Placement courses and earned a 4.7 weighted GPA and a 3.9 unweighted GPA. He was chosen as a student ambassador and this year was the Chief of Health Science Ambassadors. He is a leader of the FDHS Pep Club, president of the American Muslim Student Association and a third-year captain on the boys’ basketball team.

Caulk said he met Chhadh first because he was a student ambassador at Douglass, but also enjoyed cheering him on the basketball court.

“Oftentimes you hear people talk about how athletes take what they learn on the field or the court and apply that to other areas of their lives,” Caulk said. “I believe Bilal did the opposite. He took what he does off the court – his commitment to succeed academically, his dedication to serving others, his sense of purpose, his leadership skills – and applied it on the court.”

Chhadh will attend the University of Kentucky this fall on a William C. Parker Scholarship and major in neuroscience on a premed track.

“This scholarship from Superintendent Caulk will certainly help a lot, but it means a lot more than just the monetary value,” Chhadh said. “Receiving it from someone as courageous and hard-working as Superintendent Caulk is very humbling for me and has changed the way I view my impact on the community. It encourages me to do well in my future so I can follow his example.”