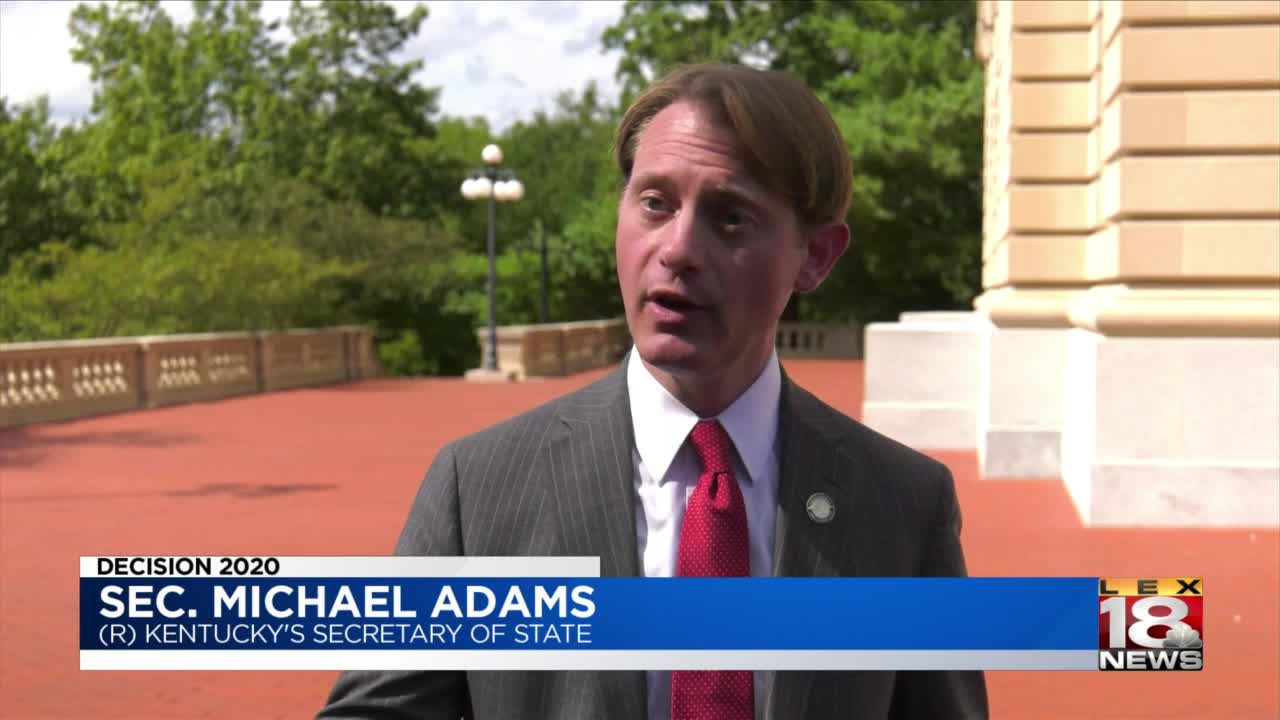 FRANKFORT, Ky. (LEX 18) — With Election Day less than 85 days away, the first draft of Kentucky's election plan is in the hands of Gov. Andy Beshear.

Secretary of State Michael Adams submitted the draft and is prepared to meet the governor to negotiate.

In his draft, there are several ways people can vote: absentee, early in-person, or in-person on Election Day. But unlike the June Primary, there is no current proposal to have no-excuse absentee voting. That means not all registered voters would be able to vote by mail.

Adams said there is a reason for his recommendation. More people tend to vote in general elections, and Adams is worried the increase in absentee votes would overload the system.

"In the primary, 75% of votes were cast absentee. You can handle that when you have 29% turnout, as we had in the primary. But when you have 70 or 75% turnout, like we expect in November, the system will crash," said Adams. "Our system - our infrastructure - can't handle millions of absentee ballots."

His concerns are that the county clerks and the Post Office wouldn't be able to handle the significant increase in absentee votes.

"Before the primary, the post office sent me a letter - the postmaster did - that said, we can handle your absentee ballot load capacity for the primary. We can handle a million absentee ballots. That was good news. That actually influenced my opinion about having this for the primary," said Adams. "Well, guess what? They didn't send me a letter like that this time. They don't think they can handle 2 million absentee ballots without some slippage. According to the Postal Office Inspector General, their goal - their public goal - for delivery of election mail is 96%. That means their goal is to lose 4% of your votes. I'm not willing to accept that."

That doesn't mean everyone wouldn't be able to vote absentee. Kentucky law already allows some people to vote that way, and Adams says his draft currently would enable more people to fit into that category.

However, Adams says he would like to a shift from relying on absentee voting to voting early in-person instead.

In the past, Governor Andy Beshear has said he also supports expanding early in-person voting, but he also wants no-excuse absentee voting in November.

"We have to put those same conditions into place in November - both because we are going to be dealing with this pandemic, but we just held a great election," said Beshear last month. "Democracy is strengthened when more people vote, and I can't imagine - whether it's the Secretary of State or others - why we would intentionally go backward knowing it's going to be harder for people to vote."

So, can the governor and the secretary of state agree? Adams says they're starting their negotiations closer than they were back in April.

"I think he and I started a lot closer in negotiation for November than we started back in April for the June primary," said Adams. "We were pretty far apart. We came and met in the middle."

Adams' current proposal is just a draft. He says he will meet with Beshear this week to figure out the final details.