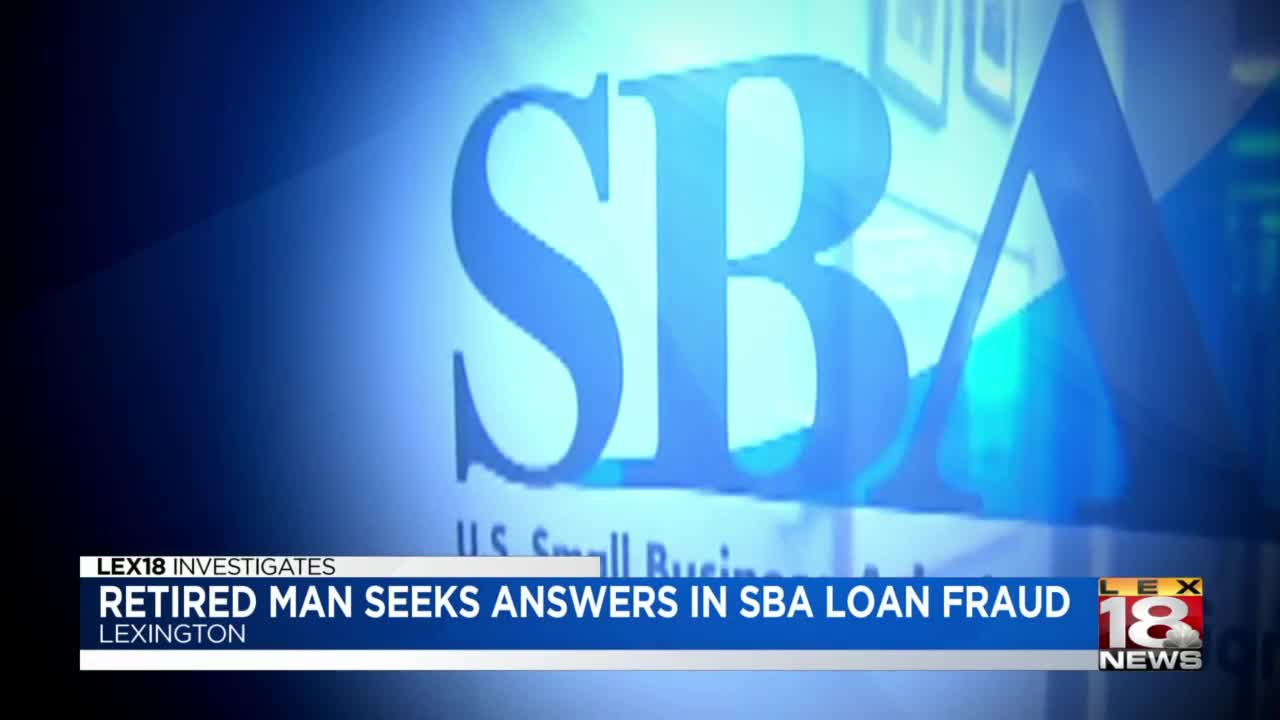 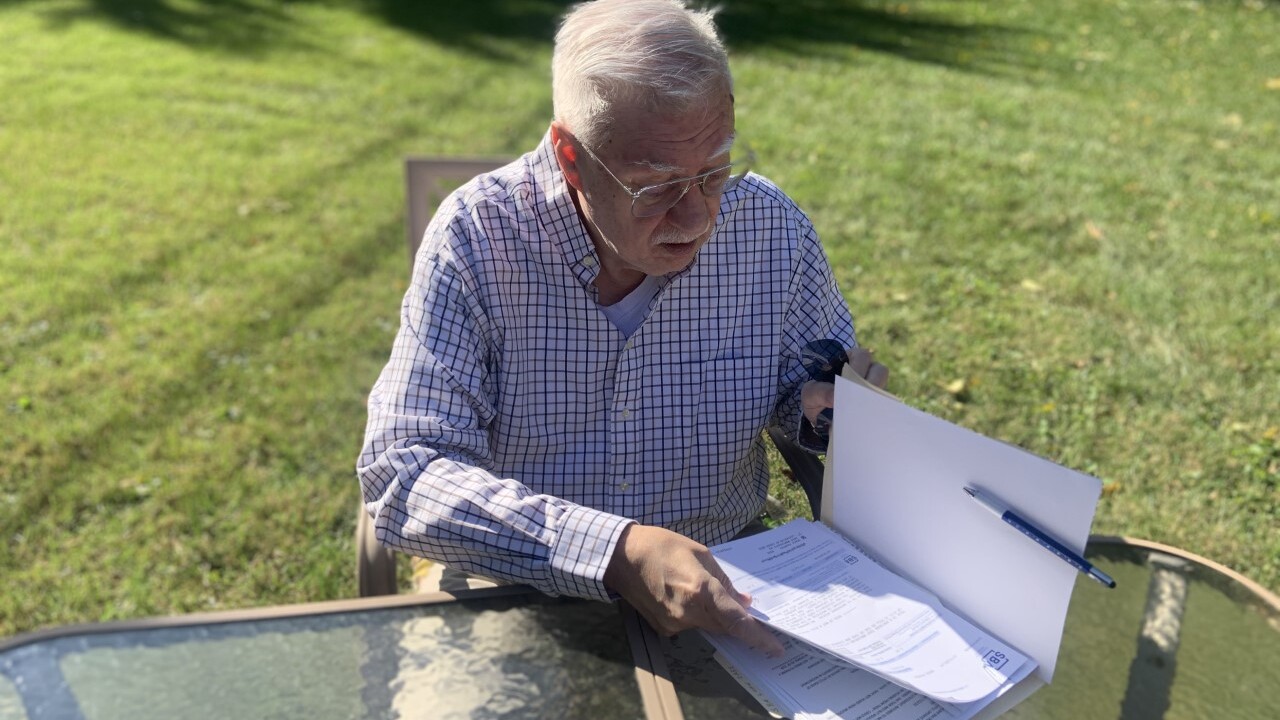 LEXINGTON, Ky. (LEX 18) — For several months, the federal government has loaned out more than $160 billion in Small Business Administration (SBA) Loans. In July, the agency's inspector general sounded the alarm on what he termed "rampant fraud" in the program, and now that is hitting home for one Lexington man.

Harry Dence has spent the last 20 plus years working in electronics.

"I own and operate Service Electronic Supply," Dence said.

Retired now, he still does repairs out of his house. He is smart about his cyber-security and is aware of how easily identity theft can occur in the internet age. When he checked his mail on September 1st and opened a statement for a $150,000 SBA Loan he did not apply for, alarm bells started going off.

"Well, what first went through my head you're not going to put it on TV," Mr. Dence chuckled. "There was no anticipation at all."

At first, he thought the paperwork was bogus, but he said after some investigating and a check of his credit report, he realized someone had, in fact, applied for a large SBA Loan in his name for a business that does not appear to exist.

"The document is in the name DENCE POUNTRY. We don't have any idea what that is; we think it might be a misspelling for the word poultry," Dence explained. "The closest thing that I found was a poultry company, chicken feed supplier in the South American country of Guyana, and they have a phone number that rings in Fuji and in China."

He searched around on the internet and came across similar cases in West Palm Beach, Florida. LEX 18's sister station, WPTV, did some digging there. Those people were the victim of an identity theft scam and quickly contacted the Secret Service and intercepted the money before it got to the alleged criminals. For Dence, the road has not been as smooth.

"So, I tried to track down the Small Business Administration through the numbers they have published in the state of Kentucky, and it's just an absolute zoo," Dence recalled. "Most of them don't get answered, the ones that do refer you to other numbers that don't get answered."

Mr. Dence said after contacting the SBA fraud hotline, he was told investigators would be in touch, but over a month later, he still has not heard from anyone. He said he is not surprised; he is disappointed.

"Since the SBA wouldn't tell me where the loan originated, I don't know what bank did this, but they obviously have no knowledge of who I am, and they're wiring money all over the country or wherever to disburse this for some guy who's supposedly in Kentucky that they've never met. It's a very cavalier approach for a bank to be taking," Dence said.

Dence's lawyer also sent a demand letter to the SBA to prove he owes the money. Finally, he too tried the Secret Service—no response from either.

In response to a request for answers, the SBA issued a statement to LEX 18 saying:

"The SBA is not able to comment on specific fraud cases. Evidence of waste, fraud, and abuse with any of SBA's loan programs is not tolerated and should be reported."

They then referred potential fraud victims to this website.

LaDonna Koebel, Executive Director of the Office of Senior Protection at the Attorney General's office, said the amount of fraud since the pandemic began only continues to skyrocket. Still, she said their office has only heard of one such case, like Mr. Dence's.

Koebel said, "During COVID, our office has been overwhelmed with the number of scam reports. As a matter of fact, if you look at August our reports compared to August of 2019, we're up nearly 8,000% in dollar losses, and that trend started in March and has just continued."

In terms of the SBA, Koebel said they had seen more grant-related scams. Contact is made to an individual saying they qualify to receive money if they just give some information. Koebel said, in a case like Mr. Dence's, it would have to be an elaborate identity theft scam to get a bank loan. Without further information on the investigation, she urged caution and taking advantage of the new change allowing people to check their credit reports once a week.

Harry Dence said he is not all that worried. He knows he will not have to pay a dime, and he has taken the appropriate steps to protect his credit. However, the $150,000 question remains, how could this happen?

"My concern is the government has an opportunity, if they act quickly, to perhaps get the money back. I'd like to see that happen, but everybody is busy doing other things," Dence said.

Consumers should always report scams to the Office of the Attorney General at www.ag.ky.gov/scams so they can assist with specific referrals to federal agencies and tracking scams in Kentucky. The AG's office advises consumers to obtain a free credit report to monitor their credit and see whether their identity is being used to open credit cards or loans. If your identity has been compromised, their office can help with additional identity theft resources.

Consumers are entitled to one free copy of their credit report from each of the three nationwide credit reporting companies. Order online from www.annualcreditreport.com, the only authorized website for free credit reports, or call 1-877-322-8228. You will need to provide your name, address, Social Security number, and birth date to verify your identity. During COVID-19, consumers can receive a free copy each week, not just once a year.

Consumers can report suspected Small Business Administration Loan Fraud to the SBA's Office of Inspector General Hotline at 800-767-0385 or online.