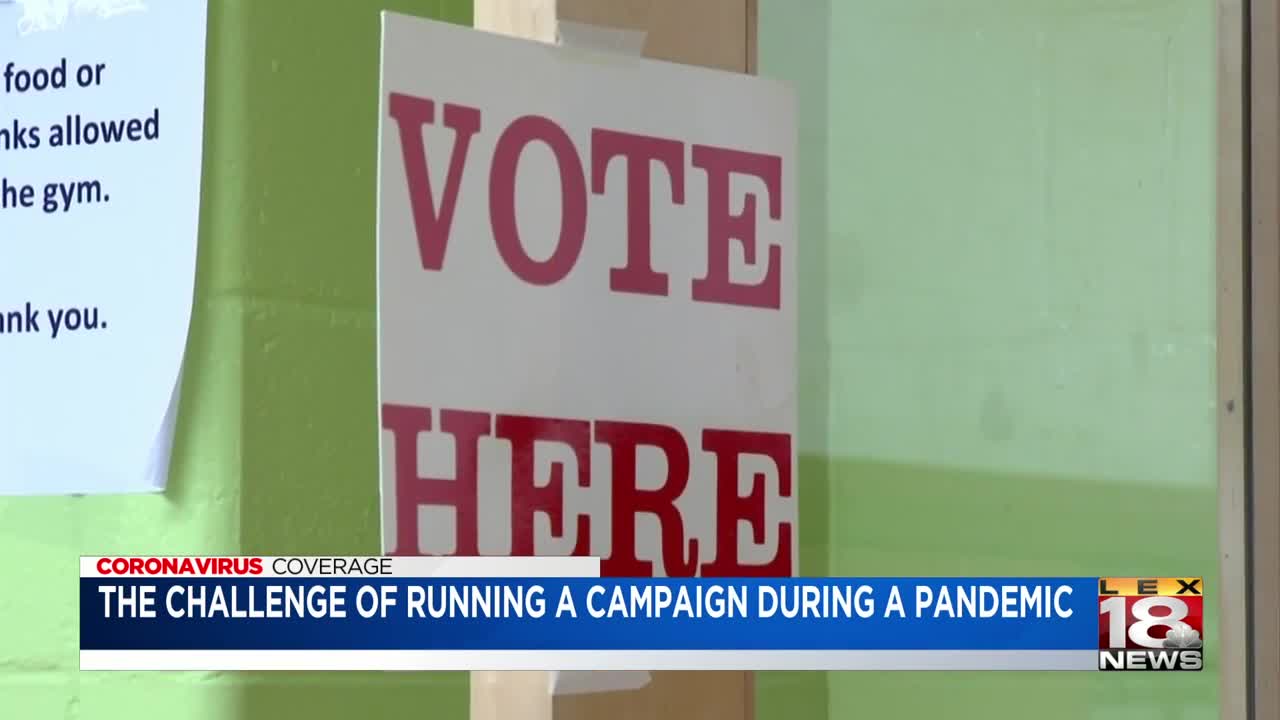 (LEX 18) — On June 23, Kentuckians will vote. However, they won't necessarily have to go to the polls to do it.

The primary will be done differently this year because of the coronavirus. All registered voters have the option of filling out an absentee ballot at home. And there will be many names to choose from when it comes to the U.S. Senate race.

On the Republican side, Senate Majority Leader Mitch McConnell has opponents but is expected to win the primary significantly. For the Democrats, several people are running. However, three are considered contending candidates - Mike Broihier, a marine and farmer, State Representative Charles Booker, and Amy McGrath, who some people believe is the front-runner.

Each of them believes they can win McConnell's job. However, they're all facing a challenge right now - running a campaign in the middle of a pandemic.

The coronavirus has made things like face-to-face interactions with voters a potential health hazard, so the candidates had no choice but to switch gears.

"It's tough," said Charles Booker. "Doing much of anything in the middle of a pandemic is tough, especially running for U.S. Senate against someone who calls himself the Grim Reaper. It has been tough."

Booker says the coronavirus makes it nearly impossible to speak to voters in-person.

Amy McGrath says it's been a challenge to do everything from home - where campaign and family life are now under one roof.

"My family and I - we're doing just fine. Although there are times when I have to admit, I would love to socially distance from my kids," McGrath joked. "But, we're still running this campaign."

Mike Broihier says his campaign staff would typically be doing things like door knocking right now. However, because of the coronavirus, they've had to change the way they do things.

"They switched gears seamlessly from what you would consider normal campaign organization - door knocking, and you know, things you would be getting ready at this point - to this," said Broihier.

He says he now reaches out to voters through traditional avenues, like rural newspapers.

"As a rural newspaper guy myself, I know that people in the counties, when they say 'the paper,' they're not talking about the Washington Post or the New York Times. They're talking about their rural weekly," said Broihier. "I'll do two, three, four interviews a day with rural weeklies."

Broihier also credits his young staff, some of whom used to work on former presidential candidate Andrew Yang's campaign, for coming up with modern ways to reach out to voters, like daily chats on social media.

"We have great guests," said Broihier. "We just talk politics and just kind of do a mental health check-in. We'll get 1,000, 2,000 people a night - which as my staff reminds me is sometimes more than Joe Biden gets for his evening live stream."

Booker said one of his campaign's goal is to get people who don't typically participate in politics involved in the process.

"My campaign was rooted in elevating people from the beginning, my whole focus has been meeting people where they are," said Booker.

Booker said his team was building the tools to help people organize and get involved before the coronavirus hit. He said it is helpful now that face-to-face interactions must be limited.

"Now, we're just leaning into it," said Booker. "We've been creating tools to help make it easier for them, and now folks are organizing from their couch, running phone banks from their kitchen table."

McGrath said her team quickly re-structured her campaign once it became clear the coronavirus would create a crisis. She said her top priority became taking care of one another.

"We created the 'Commonwealth, Common Health' initiative, which takes our volunteers and our network around the state. And it takes healthy Kentuckians and puts them with Kentuckians who might be in need right now, who may be immuno-compromised, for example, and can't get out of the house," said McGrath.

"We found that one of the things that was happening was that food banks were in real need of help," said McGrath. "So we started an initiative to raise money for food banks, and we've raised $50,000 for food banks around Kentucky."

The contending Democrats aren't the only ones who had to change things around. Senator Mitch Mcconnell's campaign said, "Team Mitch converted our voter contact program into a meal delivery service for at-risk Kentuckians."

The Team Mitch campaign says McConnell himself has not been out campaigning because he is working on relief efforts in the Senate.

"Weeks during the spring that would have been dedicated to campaigning were erased as Leader McConnell was manning his post in the Senate and doing the job Kentuckians elected him to do," said Katharine Cooksey, the campaign's press secretary. "While there have been no in-person rallies or events, Leader McConnell and our team are constantly talking to folks by phone or through video conferences."