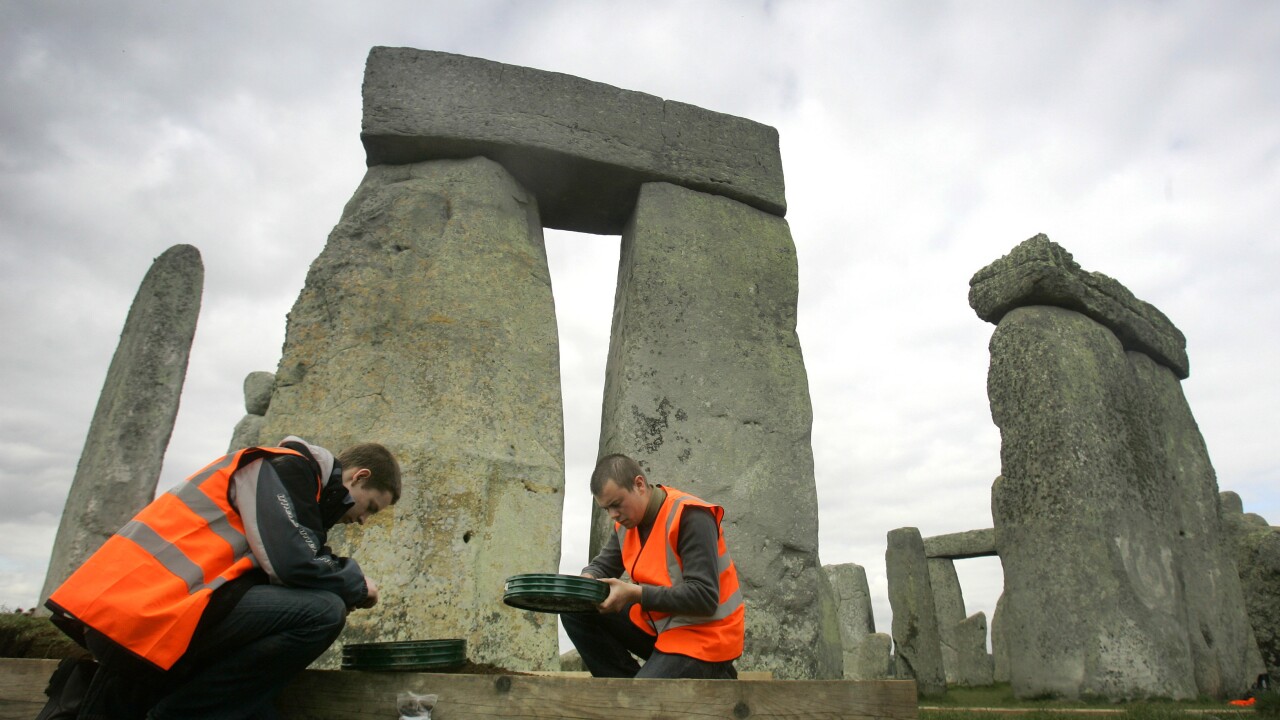 Kirsty Wigglesworth/ASSOCIATED PRESS
Archaeology students Steve Bush, right, and Sam Ferguson, left, sieve through earth amongst the stones at Stonehenge, England, Monday, March 31, 2008. Some of England's most sacred soil was disturbed Monday for the first time in more than four decades as archeologists try to solve the enduring riddle of Stonehenge: when and why was the prehistoric monument built. The excavation project, set to last until April 11, is designed to unearth materials that can be used to establish a firm date for when the first, mysterious set of bluestones was put in place at Stonehenge, one of Britain's best known and least understood landmarks. (AP Photo/Kirsty Wigglesworth)

A centuries-old question surrounding Stonehenge has been solved, linking the tall megaliths to a geographic area where they may have come from.

The original source of the massive sarsen stones has long been debated, at least four centuries according to the study. The smaller “bluestones” near the center of the circular monument have been traced to an area in Wales, about 200 km away, in an earlier study.

Geologists used geochemical data from the sarsens and compared it to the geochemical signature of different regions.

“From this, we identify West Woods, Wiltshire, 25 km (roughly 15.5 miles) north of Stonehenge, as the most probable source area for the majority of sarsens at the monument,” researchers stated in their study.

The sarsens were erected during the mid-third millennium BCE, and weigh roughly 20 metric tons. Only 52 of the original about 80 sarsen stones remain.

Research into the sarsen stones was renewed in 2018 when a core piece of one of the stones was returned to England and scientists were able to examine it. Restoration work on some of the stones in 1958 meant that three of the large stones had holes drilled to install metal bolts. One of the core pieces was kept by an American who was on-site during the drilling.

When the core piece was returned, a section was sampled by the geologists to look at the elements deep within the sarsen stone.

Researchers say that 50 of the 52 sarsen stones share similar geochemistry, and that they identified an area in Wiltshire as having these geochemical elements.

The results showed a best match with one particular location, *finally* revealing where the giant sarsen stones probably come from...

The West Woods area of Wiltshire has a history of activity through the Mesolithic and Iron Age periods and is about 3 km south of where some archaeologists had been looking for Stonehenge’s sarsen quarries.

Although this question may be answered, there are many more being debated about the unique monument; including how the stones were transported, why the smaller stones come from a different place, and why exactly the monument was erected.