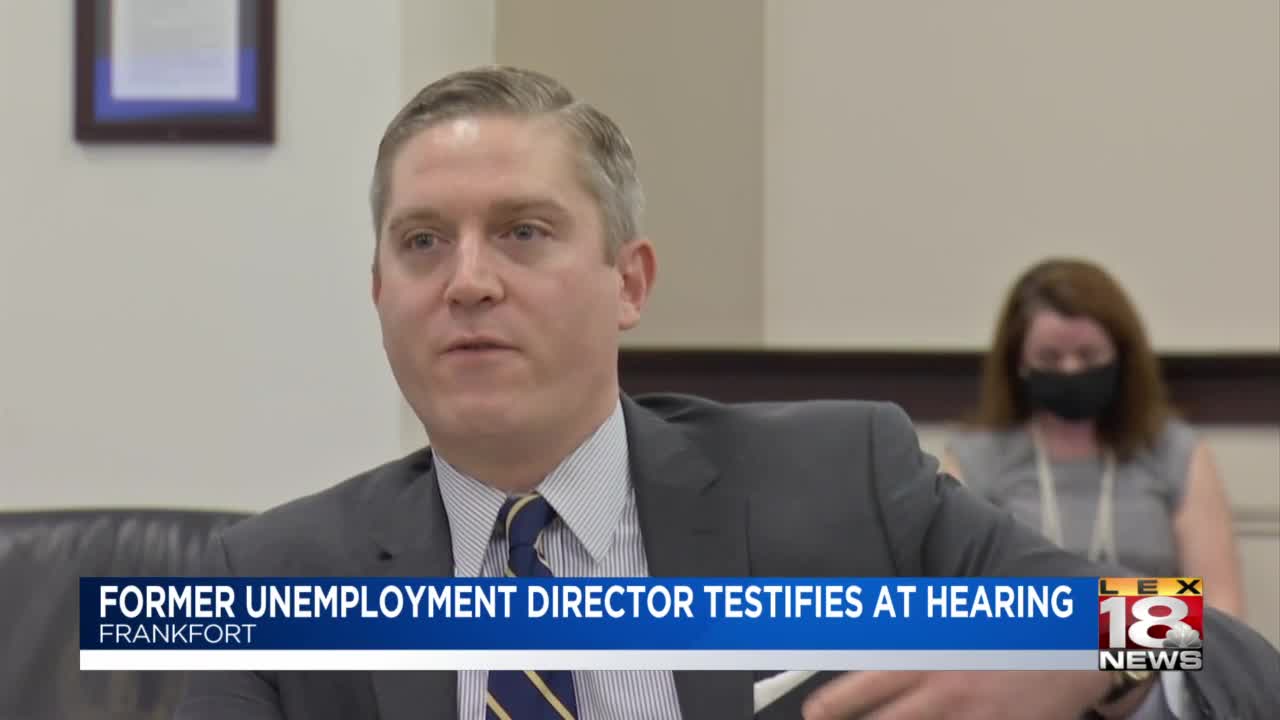 FRANKFORT, Ky. (LEX 18) — The former executive director of Kentucky's Unemployment Insurance Office told lawmakers the Beshear Administration rushed the benefits process early on in the pandemic, which led to delays many Kentuckians have faced.

Almost three months after he was fired, Muncie McNamara testified before the Interim Joint Committee on Economic Development and Workforce Investment.

McNamara's name was thrust into the news last week when the Kentucky Center for Investigative Reporting published an article about McNamara's time as executive director. According to the report, McNamara "had no experience with unemployment systems or state government before taking the job."

The article goes on to describe McNamara's connections to the Beshear administration. He was hired by Lieutenant Governor Jacqueline Coleman, who is a friend of McNamara's wife.

On Thursday, McNamara told lawmakers that he did have a relationship with the Beshear campaign. But he said he got the job only after he applied for it.

McNamara told lawmakers about issues he saw at the Unemployment Insurance Office when the pandemic hit Kentucky. He stressed that neither he nor Josh Benton, the Deputy Secretary for the Cabinet of Education and Workforce Development, were given a heads-up before Gov. Andy Beshear ordered a statewide closure of in-person businesses, which led to a huge spike in unemployment claims.

"I had a hunch it was coming. I think we all kind of suspected it was coming," said McNamara. "But we had no idea when the governor was going to do that."

McNamara told lawmakers that Benton and Beshear rushed to extend unemployment benefits to independent contractors and others who usually would not qualify for unemployment insurance. He believes that quick action contributed to the months-long delays many Kentuckians have experienced.

"[Benton] wanted to do this as soon as possible, and he did not want to wait for the feds, meaning the U.S. Department of Labor, to act," said McNamara. "He wanted Kentucky to take the lead in this."

McNamara said the state's old unemployment system wasn't set up to handle this. It was set up to reject claims from independent contractors automatically.

"The pressure from the Governor's Office was growing. It was very clear that the office of unemployment needed to find a way to pay all claims and pay everybody as quickly as possible," said McNamara. "Frankly, had we taken more time to plan, make these computer changes ahead of time before we started accepting and processing claims, a lot of this could've been avoided."

McNamara also addressed a data breach that happened in April.

State officials have said in the past that they took quick action once the breach was identified on April 23. McNamara said the administration's explanation was partially correct.

He told lawmakers that the unemployment system was locked down after the April 23rd breach was detected, but he found a different potential breach the day before that. He says he forwarded that email to Benton and IT, but action was taken the following day.

"That's when the reaction happened. That's when they shut down access and closed it off. No one could see any documents for time being while they tried to patch the issue. That was the second one," said McNamara. "I forwarded them the initial one a day earlier. So they knew about it a day earlier than they acknowledged that there was an issue."

Senator Karen Berg, who was the only Democrat allowed to ask McNamara a question on Thursday, criticized him for not doing more about the first breach.

"I don't know what the security systems you have in place are, but I will tell you I feel that you going home without addressing it on the 22nd, when apparently you were the first person in the administration to have been notified of the data breach - and you left your office without closing down the systems," said Berg.

She was unable to finish her statement because the committee's co-chair, Rep. Russell Webber, interrupted and told Berg that McNamara was not on trial.

"We're not having a cross-examination," said Webber.

The other Democrats in the room said they tried to get a question in, but were not allowed to speak.

Outside of the committee room, they defended Beshear, saying he inherited a broken unemployment system that was overloaded by the pandemic.

"He's had to deal with what no other governor in the history of the commonwealth had to deal with. Over a million unemployment insurance claims in, like, a six month period with a 91% accuracy. That is commendable. That shows leadership, and what we saw today, instead, was a witchhunt by the republican party against him," said Senator Reginald Thomas.

Republican lawmakers saw the meeting differently. Rep. Webber said the meeting was meant to figure out what went wrong with the unemployment system.

"I want to stress that this is a fact-finding mission, and anyone who tells you it's about politics hasn't talked to any of the thousands of Kentuckians who have gone months without benefits," said Webber.

"Let me say that everybody that's here, or those at home that cover politics, or have watched, see a similar story - though not in unemployment - just about every year. Somebody is terminated. I guess they decide to go out by trying to burn down the house," said Beshear.

Without naming McNamara, Beshear said he was correctly fired.

"It appears that the termination was valid," said Beshear.

Beshear specifically addressed McNamara's claim that the first data breach was not handled the day it was discovered.

"What I was shown was that they forwarded an email to people that are getting thousands of emails, and then went home," said Beshear. "If you're the head of something, you got a bigger obligation than that."