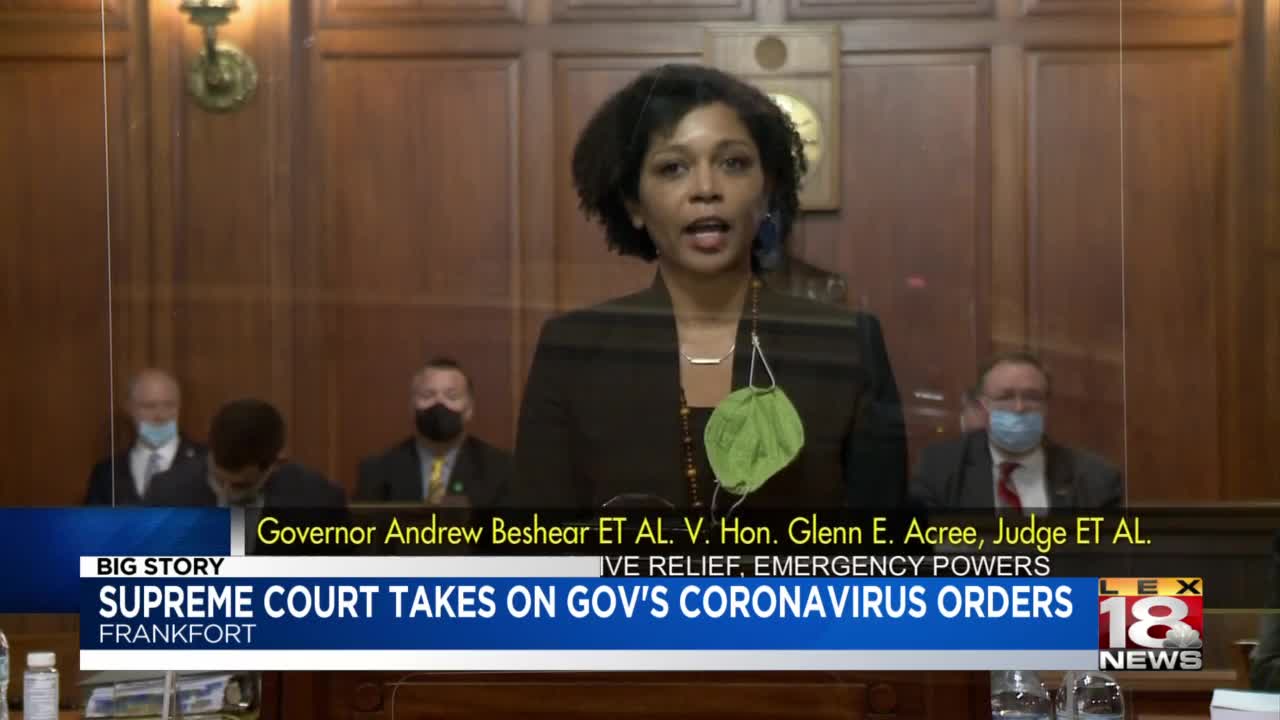 FRANKFORT, Ky. (LEX 18) — The Court heard arguments on Thursday about the legality of the Gov. Andy Beshear's executive orders during the pandemic. Its decision in the case will dictate whether Kentuckians have to wear masks and follow other COVID-19 related mandates.

Gov. Beshear's General Counsel and Chief of Staff, La Tasha Buckner, told the justices that state law and the constitution give the governor the power to act during an emergency.

"The governor has taken quick, decisive action to help protect the state during this state of emergency," said Buckner.

She called the lawsuit an unprecedented maneuver with serious consequences.

"The appellees want to gut the governor's ability to take actions in emergencies," said Buckner.

After the arguments in court, Gov. Beshear said his actions are like what other governors have done during the pandemic.

"You look around this country and virtually every other governor has operated the same way that I have - it's been absolutely critical for them to do so," said Beshear. "If the Attorney General wins this case, Kentucky has fewer tools to fight this virus than any other state in the nation, and we don't want to be there."

He said his orders aren't perfect, but they're meant to save lives. He believes the Court will rule in his favor, but he believes people will die if his orders are struck down.

Attorney General Daniel Cameron's team doesn't question the governor's intentions to save lives. However, they believe Gov. Beshear overstepped his power by issuing hundreds of pages of orders and regulations.

State Solicitor General Chad Meredith, who represented Cameron in court, said Gov. Beshear has created his own legal code which controls every aspect of people's lives.

"Is the governor powerless to address COVID-19? No," said Meredith. "Does that mean he can do whatever he wants? No."

"What we in the Attorney General's Office try to do is represent the values and the civil liberties of all our citizens. That's what we endeavored to do," said Cameron. "Again, not in any way to disparage the governor - I understand his position and view - but even in the midst of a pandemic, the constitution is not suspended."

“The Governor has, without any input from the elected members of the General Assembly, built a new legal framework for the Commonwealth centered around COVID-19, which he continues to add to even now, more than six months after the emergency declaration was filed," said Cameron. "While some new policies and guidelines are needed to slow the spread of the disease and ensure Kentuckians adhere to recommended health guidelines, these policies must strike a necessary balance between public health and protecting the constitutional rights of Kentuckians. Our Constitution and state laws do not allow for the broad, arbitrary, and long-term actions put in place by the Governor since early March.”

It’s not known how long it will take the Supreme Court to rule in the case.