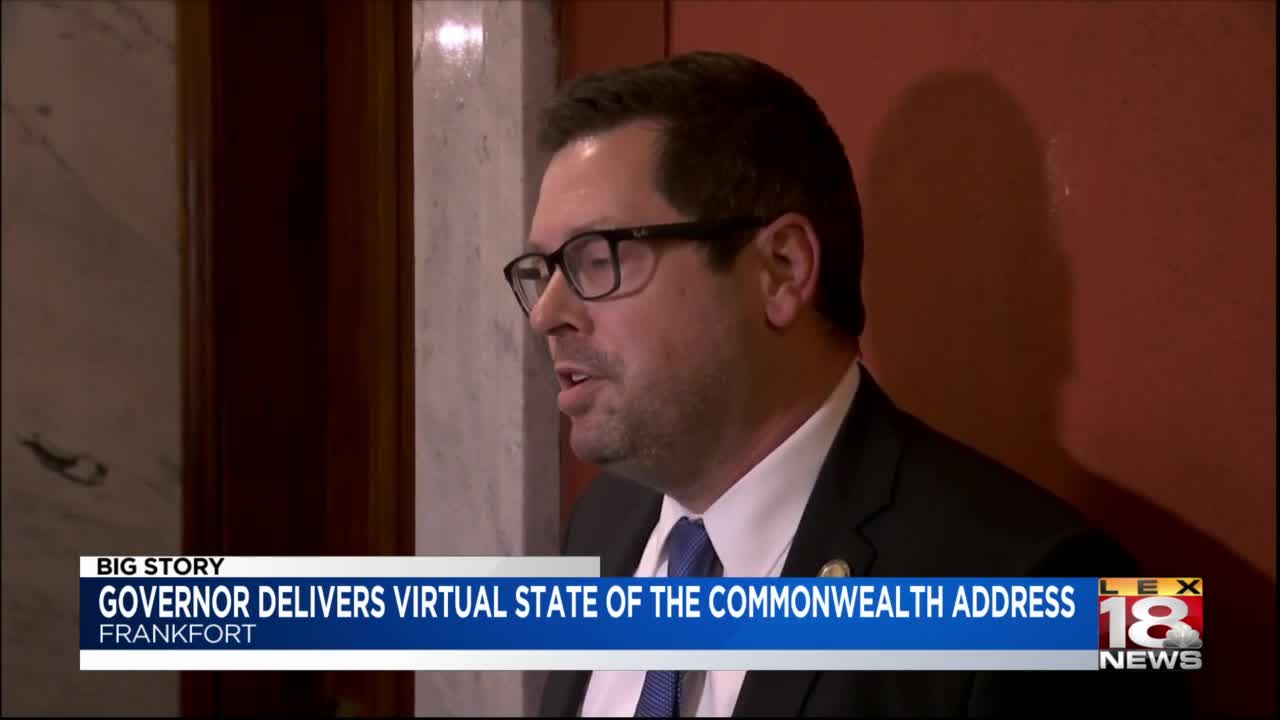 FRANKFORT, Ky. (LEX 18) — As the pandemic and its effects continue to dominate the lives of many Kentuckians, Gov. Andy Beshear delivered a virtual State of the Commonwealth Thursday.

The governor began his address by discussing the state's response to the coronavirus and presented a budget he said will help Kentucky lead in a post-COVID economy.

"When the full story of this pandemic is told, team Kentucky will stand tall on how we took care of one another," he said during the address.

He also called for an end to "petty partisanship."

"Let me be clear, every moment in this short session we spend fighting is a loss for our Kentucky families," he said.

He asked legislators to fast-track a bill to provide $220 million in relief to small businesses and said he would authorize $48 million in CARES Act funding for individuals who've waited too long for unemployment benefits or missed out on the federal government's Lost Wages Assistance Program because they made too little.

His budget proposal also includes $1,000 raises for teachers, a 1% raise for state employees an $272 million in funds to improve the state's infrastructure.

But Republicans, who control the Kentucky House and Senate with super-majorities said Thursday they need to take a closer look at the governor's proposal.

"The devils in the details we'll look and see how he came up with his creative spending plans but I think we will be taking a much more conservative look at how to spend the taxpayer's dollars wisely," said Rep. Steven Rudy, Majority Floor Leader.

"We appreciate the Governor’s diligence in crafting his version of the state budget and will continue to review the documents provided and welcome input from him as the budget process unfolds. A budget is the ultimate policy document, and this means we must invest every taxpayer dollar in a manner that reflects our state’s priorities and financial realities. This pandemic is far from over and our Commonwealth still faces great uncertainty. We question the prudence of spending millions of dollars in new programs when our economy remains extraordinarily unpredictable.

“While there is still much work to be done, the General Assembly will do so with extreme consideration and care as it develops a one-year budget that will most effectively benefit the people of the Commonwealth.”

“Governor Beshear’s budget is exactly the blueprint state government needs to help Kentuckians navigate what will hopefully be the final months of the COVID-19 pandemic. It makes major investments in our economy – including providing much-needed help for struggling businesses and those still unemployed – and it puts the commonwealth in position to thrive in the years ahead. We also value the increased investment in our schools, our state workers, and critical healthcare programs. We are definitely pleased that state revenues continue to be much stronger than expected, something that would have been thought impossible back in March. It’s hard to imagine how the General Assembly improves this spending plan.”

The governor's speech was delayed by 24 hours after the U.S. Capitol was stormed by pro-Trump rioters Wednesday.

Kentucky lawmakers of both parties have since condemned the attack and called for an end to violence.

Governor Beshear addressed the attack in the last lines of his speech.

"In the face of so much hate and even insurrection, we must be Kentuckians and Americans before we're anything else."