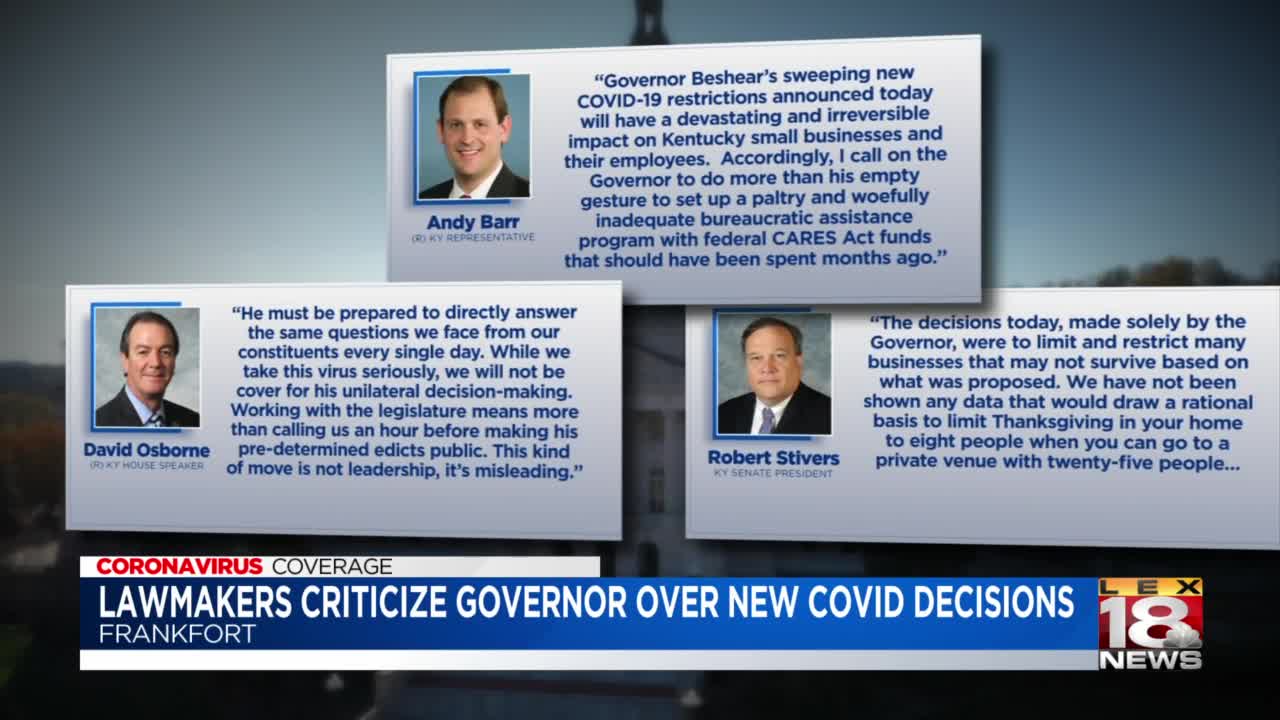 Gov. Beshear knew the criticism was coming, but he believes his action will save lives and slow the spread of COVID-19.

"When addressing COVID-19, action is unpopular, but inaction is deadly," said Beshear.

Through individual statements, several republican lawmakers made it clear they're not happy with Gov. Beshear's new rules.

House Speaker David Osborne and Senate President Robert Stivers criticized the governor for not asking for input from the legislative branch before making his decisions. The lack of involvement has been a point of frustration for legislative leaders since the beginning of the pandemic. Lawmakers have been critical that Beshear has not involved them in the process.

On Wednesday, Beshear briefed lawmakers an hour before announcing his decisions to the public. But lawmakers describe the meeting as being told what would happen rather than asking for their input.

“[Wednesday]’s meeting was not a consultation, nor did the Governor seek any input from legislative leaders," said Speaker Osborne.

"While we take this virus seriously, we will not be cover for his unilateral decision-making. Working with the legislature means more than calling us an hour before making his pre-determined edicts public," said Osborne. "This kind of move is not leadership, it’s misleading.”

Lawmakers also criticized the governor for not sharing data based on contact tracing to explain his restrictions.

"Where are we seeing contact tracing give us indicators or information that we can use to make policies? I asked that question yesterday, and I think it's been posed to the governor a couple of times," said Stivers. "I'm not trying to be critical. I'm trying to be constructive."

Republicans currently have no formal plan to limit the spread of COVID-19 in Kentucky. However, they have suggested using contact tracing data to issue more targeted restrictions.

LEX 18 asked Stivers what policies he would prefer to see rather than the governor's restrictions, but he didn't give an answer, stating that it is impossible to say what policy would be best without proper data to back decisions.

But what they do want is to have a say in the decisions the governor is making. So Republican legislative leaders have made it clear they will use their super majorities to limit the executive powers during an emergency.

"We are definitely going to put reporting requirements, measures, more clarity, definitiveness, look at extent and duration of what a governor can do," said Stivers.

The Kentucky Democratic Party defended the governor's actions. The party's chair, Colmon Elridge, said the governor is consulting experts before making his decisions.

“Every decision the governor has made regarding the COVID-19 crisis has been made after consulting public health experts and taking into consideration any state actions impact on schools, businesses, our ability to come together as families to celebrate or mourn, and our ability to return to places that nourish our spirits such as churches and houses of worship," said Elridge. "These decisions, while not easy, have been made because of the clear evidence about the spread of the virus in our communities. "

"As a country and as a Commonwealth, we once respected the idea that in times such as these, science, not partisanship, would define our outcomes," said Elridge. "Now is not the time for our leaders and public servants to play politics with people’s lives or refuse to take science seriously. People are dying. Small businesses are hurting. Communities of color and communities with lack of access to quality and affordable healthcare are disproportionately suffering and dying."