Lexington leaders encourage voting by mail, give voters a look at how absentee ballots are processed 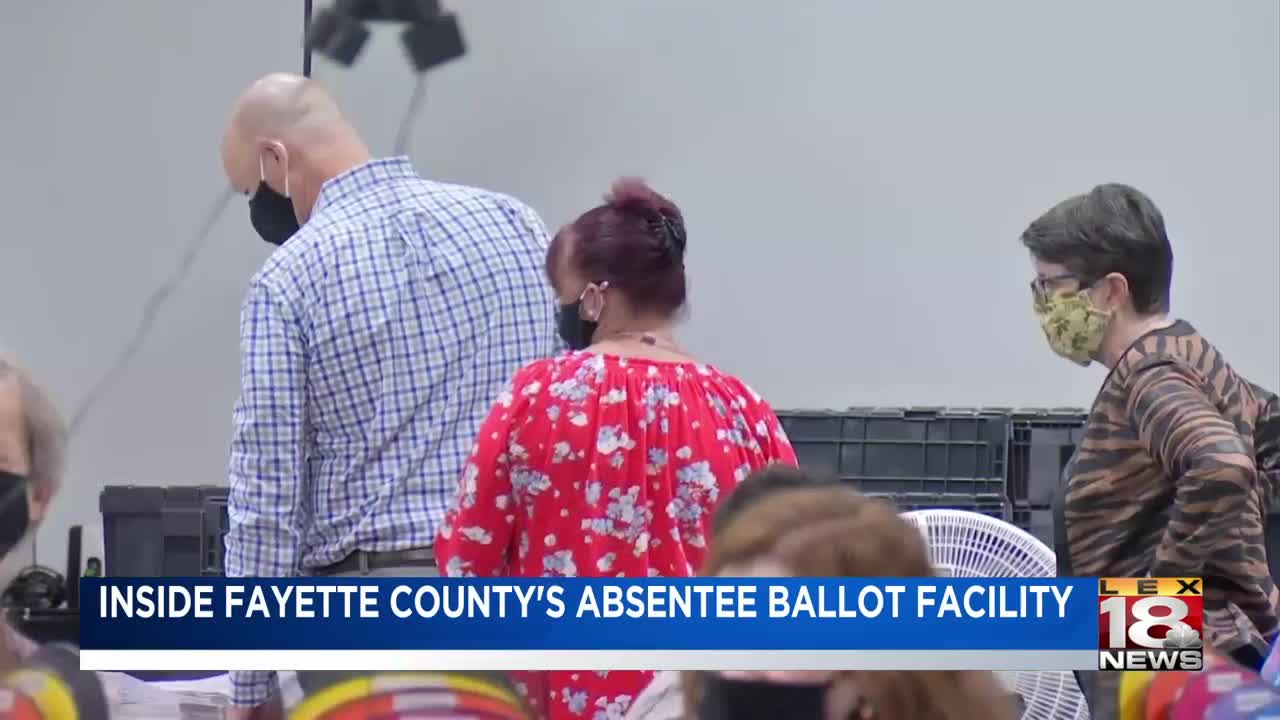 "Four years ago, we voted 60,000 people in person in that primary, and it was a contested primary. This one is largely less contested. We already got 67,000 ballot requests," said Blevins. "So we've turned out heavier this election, and we're not even close to finished."

Blevins said approximately 57,000 absentee ballots have been sent out to Fayette County voters. More than 15% of them have already been returned and counted.

"We've only had about 10,000 come in until [Tuesday] morning, and this morning we got a mountain of ballots," said Blevins. "So way to go, Lexington."

All of Fayette County' absentee ballots are processed in the City's Westside Facility. That's where the Ballot Processing Committee oversees elections officers as they handle the votes.

"There are two Ds, one I, and one R that form our Ballot Processing Committee here in Fayette County," said Blevins. "They're behind me guiding a bunch of elections officers who are actually doing the opening, checking of the names - all that sort of thing is happening behind us as we speak."

Blevins says the supervised process ensures that all ballots are counted.

"Once the ballots are open, you'll notice that they're occasionally tearing off the flap on the inner security envelope. That's so your ballot becomes anonymous," said Blevins. "We have to count over and over again to make sure we have all ballots accounted for, so you'll see them stack and recount. Eventually, we open the inner envelope and remove your ballot. Ballots are then taken to [the left] side of the room and fed into a scanner where they will stay until after the election."

On June 30, one week after Election Day, Blevins will provide the final count and totals to the state.

When the ballots arrive in the mail, they are sorted at the Clerk's Office, placed into gray boxes, and seals are attached with numbers on them.

"What's called a transmittal sheet is placed in the bucket, as well as on top, and taped. So it's sealed shut with a known number of ballots," said Blevins.

Blevins said the ballots are brought to the Westside Facility the next day.

"They stay sealed until this team is ready to open one to process it," said Blevins. "Once ballots are opened and counted, the actual ballots themselves are going to remain in the secure tubs beneath the scanners."

Blevins reassured voters the voter bins under the scanners are sealed as well.

"At no time is a ballot left out. It is always inside something, sealed and locked," said Blevins.

Blevins said there is security at the facility, and several of the campaigns have provided observers to keep an eye on everything. Voters can also watch the entire process happen because Fayette County is live streaming it.

"I think we're being very open and transparent," said Blevins.

June 15 is the last day to request an absentee ballot. The easiest way to get one is at govoteky.com. Voters can also call their County Clerk's Office.

Absentee ballots must be postmarked by June 23rd. Postage is provided.

However, if you cannot mail in your absentee ballot, Fayette County voters can drop it off at two locations:

While the Fayette County Clerk is encouraging voters to utilize absentee ballots, in-person options are available as well.
The first option is for people who need special accommodations. You can make an appointment to vote at the Lexington Senior Center from June 8th to June 23rd. Call 859-253-3344 to schedule an appointment.

The second option is for voting on Election Day. Fayette County voters who want to vote in-person can only do so at Kroger Field. It is the county's only polling center that will be open from 6 a.m. to 6 p.m.

Blevins says these options are for people who need to vote in person.

"We do not want people to use this unless you absolutely need to. There is a small part of our community that needs to vote in person. I totally understand that, and that's why we're having one location for those kinds of people. Everyone else should do the right thing and vote by mail so that we keep the COVID crisis under control."

Blevins said those who are planning to vote at Kroger Field should enter through Gate 10 or 11. There will be markings on the ground to help people maintain social distance.

"We're going to scan your ID. We're going to have your signature done electronically, so nobody has to touch anything. You step up to the table, you're handed your paper ballot and a pen, then you go over, and we have privacy booths for you to fill out your ballot," said Blevins. "You carry your own ballot over to a scanner and feed it in yourself. Once it's done, you're out of there."

Blevins said he does not know how many people will show up to vote in person, but he hopes it's only the people who need to.

"I very much hope it's not very many people because if it is, you're going to have a bad day, and all we're doing is exposing ourselves to this silly virus," said Blevins.