SOTC: Packing the Capitol in the fight for education 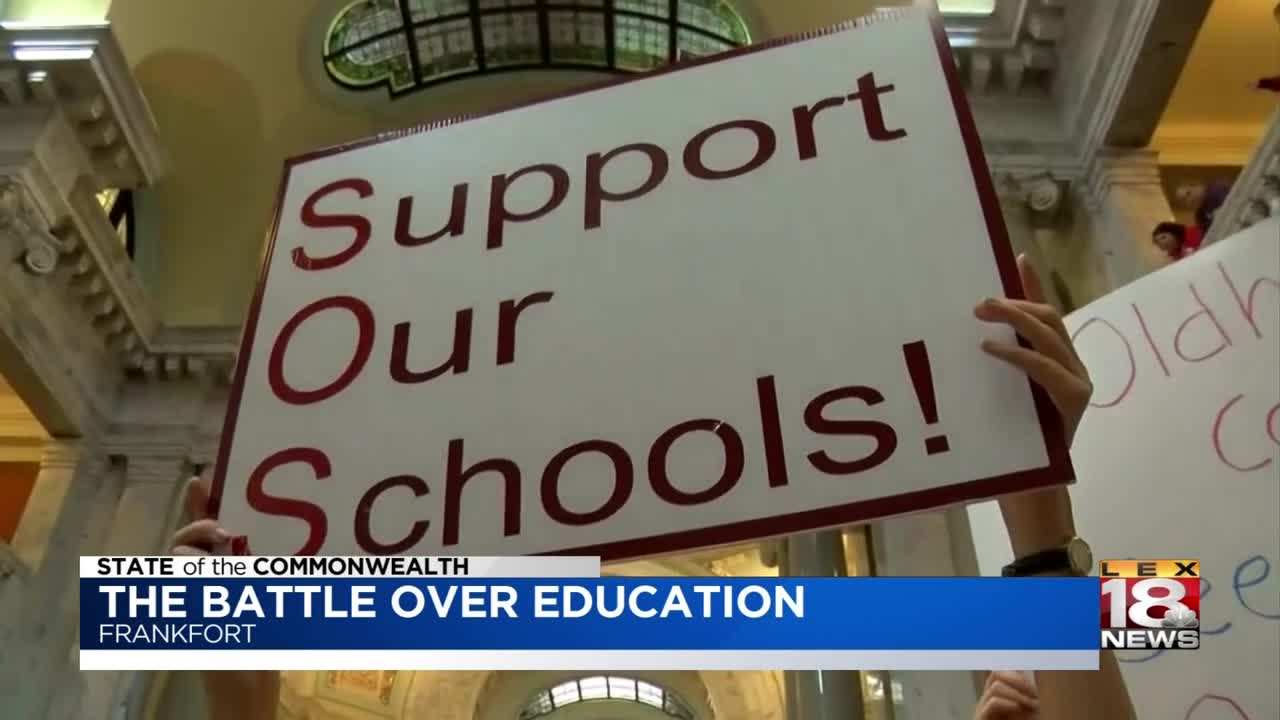 FRANKFORT, Ky. (LEX 18) — The fight over public education has made countless headlines across Kentucky over the last few years and it has become one of the biggest issues in this gubernatorial race.

Gov. Matt Bevin has clashed with teachers as he and legislators have tried to change their pension system.

Now, the two are going head to head in the governor's race and are fighting for the teacher's votes.

It can be hard to keep track of what's going on when it comes to the battle over education.

Teachers have said that they are fighting for the pension that they were promised.

Lawmakers and Bevin have said that they are trying to fix a system that is doomed for failure.

Over the last two years or so, this battle has come to a head. A battle that now involves protests, sickouts and threats of a big fine.

Teachers went into 2018 ready to fight back. With school funding and their pensions on the line, they showed up in Frankfort and made some noise.

The protests somewhat worked. With thousands of teachers at the Capitol, Senate Bill 1 was defeated. The bill would have saved the state almost $5 billion, but it would have but benefits for teachers. So, teachers cheered when the bill failed.

But with only a few days left in the legislative session, a quick change was made.

Senate Bill 151, originally a sewer bill, all of a sudden had pension reform added on. It was moving through the process quickly, and with a vote expected that night, some teachers rushed to the Capitol again.

"Putting it in a sewer bill shows these guys climbed out of the gutter. We're gonna send 'em back to the gutter," said Debbie Webster, a supporter of the teachers.

The very next day, 20 school districts shut down as thousands of teachers called in sick. Instead of school, many went to Frankfort to show lawmakers that they were upset.

Senate Bill 151 passed, but the Supreme Court ultimately struck it down and said the way it was passed broke the Constitution. So 151 was dead, but teachers were still on edge, knowing this fight would continue.

"They took that trust from us last year so we're watching closely. We've made phone calls, done our emails, and hoping that they'll listen," said retired Teacher Lydia Coffey.

In 2019, teachers were not taking any chances. When pensions were on the agenda, a sickout was called. Several school districts, including the state's two biggest, Fayette and Jefferson County, shut down for the day and teachers rallied in Frankfort.

The session ended and no major changes were made on public school teacher's pensions. But then, a new battle was started to find out which teachers took part in the sickout.

Lewis requested all the names of teachers who called out sick. Then, came the subpoenas.

The Labor Cabinet launched an investigation into the teachers who participated.

The fine the teachers possibly faced was $1,000 per day.

But Beshear sued to stop the investigation and said the teacher's protests were perfectly legal and protected by free speech.

"As long as teachers in a sickout are protesting overall funding of public education or issues relating to the public education system in general, it is protected First Amendment speech," said Beshear.

Bevin fired back and said that this is not a First Amendment issues. He said the sickouts were illegal strikes.

"There is no mention in this lawsuit of the free speech rights of any of these people at stake," said Bevin. "Not one word because that's not what it is about. He's a hypocrite."

But this time, "no penalties will be assessed for violations in tihs specific instance."

Next time may be different. The labor secretary wrote, in part, "Let it be clearly understood that the grace extended in this instance will not be extended for future such proven violations."