State Board of Elections meeting ends in screaming, arguing 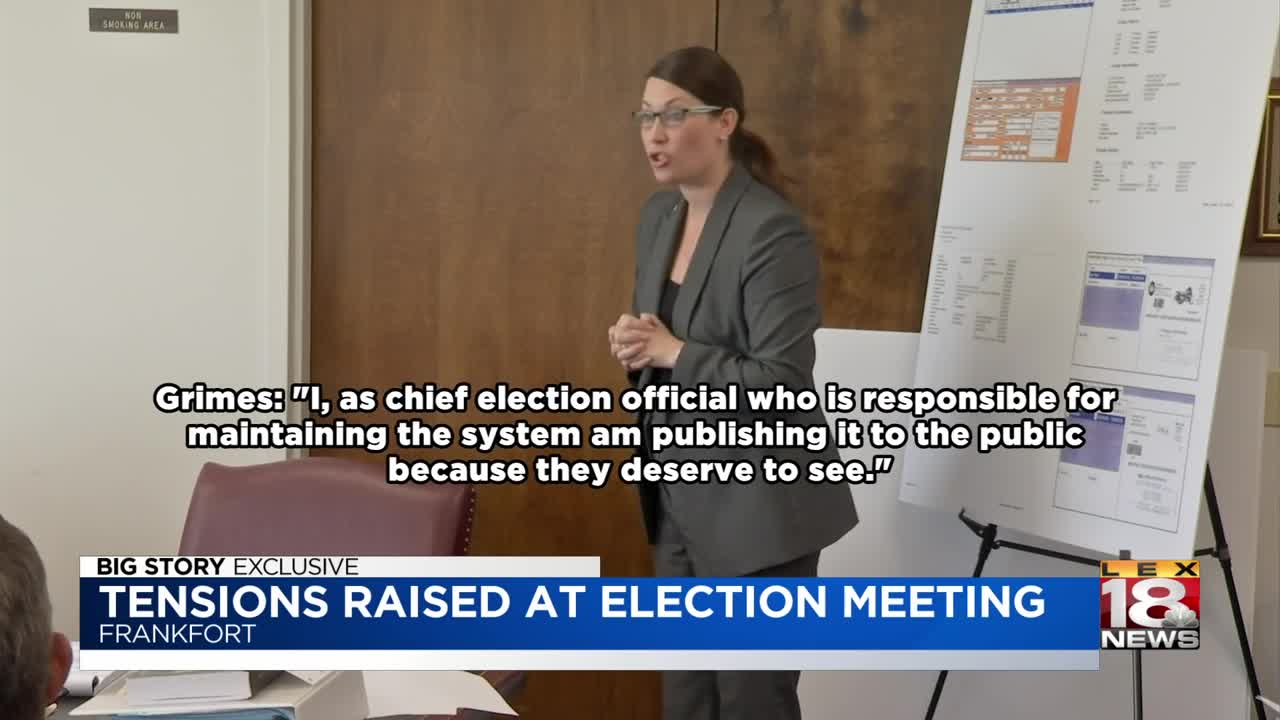 FRANKFORT, Ky. (LEX 18) — Tuesday's State Board of Elections meeting started off as normal, but it ended with arguing, screaming, cursing and people storming out after the meeting.

The fighting continued as LEX 18's Political Reporter Karolina Buczek stood in the hallway, waiting for an interview after the meeting. You can hear Secretary of State Alison Lundergan Grimes yelling in a room, as Executive Director of State Board of Elections Jared Dearing told our crew, "it's a circus and chaos." Then Grimes walked out, letting LEX 18 know she would be available for an interview outside.

It all began when the meeting addressed Monday's court injunction where a Franklin County judge said that the State Board of Elections needs to take the 175,000 voters it previously listed as "inactive" and put them back on the normal voter roll.

"The order is requesting that we provide information to the clerks and poll workers on how this should be implemented," said Dearing.

He explained that the voters will no longer be on an inactive list, but they'll have an asterisk by their name on the voter roll, meaning when they go to vote, they'll be asked to update their address information to ensure they're voting in the correct spot.

Then, Grimes questioned whether the information in the voter registration system is accurate.

That's when Grimes brought out poster boards and the meeting got heated. The posters show information on the voter registration system and as soon as Grimes put up the first poster, Dearing, and other members, got upset that the information was being shown, and he addressed the LEX 18 crew in the room.

"It shows our fields and how our fields are located in the system," said Dearing. He then asked the LEX 18 photographer in the room, "Please do not air that on television sir."

"Mr.Chairman, anything that is here...one, I have permission of the voter, and two, anything that's not publicly available is redacted," Grimes responded.

"It's not about the voter and the voter's record.It's a snapshot of the system and how the system is laid out," he said back.

"I think this is instructive," said Grimes.

"This is not for public consumption," Dearing argued.

"This is a vast breach our security, ma'am. Please do not do this,," Dearing said.

"Does anybody here got national security clearance at the top level?" Grimes asked the room. Dearing and one other member said yes.

"Top secret clearance? Because I just met with Earl Rose who said no one else in the this state but myself has it," said Grimes. "So you're telling me you do?"

"Jennifer has secret clearance, but the fact that you have top secret clearance does not denote that you're allowed to release how our fields work," Dearing responded. "Please. Please do not do this."

Grimes said she put the poster board up to show the board errors in the system that caused people to be initially listed as inactive. She says a voter contacted her and told her that she was marked as inactive, and Grimes said it shows that happened because her name was linked to an incorrect voter registration card.

"This is Ms.Valeria Badley," said Grimes. "We are marking her inactive on the basis of a card that's addressed to Tammy Jane Allen. There's no other way to show you all this because you aren't asking for the information, you aren't overseeing the information, so I'm bringing this forward to you today."

Several board members became upset because they claim that showing the boards, which show how the fields are laid out, could put Kentucky's system at risk.

"Please do not put our system at risk by putting how our fields are laid out on television in this state. This is beyond irresponsible," said Dearing. Dearing and Grimes then argued on whether or not the information was available publicly.

"I, as chief election official who is responsible for maintaining the system, am publishing it to the public, because they deserve to see," said Grimes.

The meeting eventually ended and while our camera was off, Dearing cursed at one of Grimes' staffers. He later apologized to us, but before that, an argument happened inside. The secretary claims someone said the board did not need to listen to her because her term is almost up. Afterwards, Grimes reiterated to our crew that it was important to show the boards.

Dearing then reiterated to LEX 18 that what Grimes revealed was dangerous.

"Because of system's securities, I think any IT or systems professional will tell you, there are some systems parameters that you don't publish and you don't make them public, and so I am asking you as journalists, as professionals, as voters of the Commonwealth - I hope you're registered - that you not publish those," he said.

LEX 18 did not listen to that request because everything that was discussed at the meeting happened in an open, public meeting and the information was released by an elected official, the Secretary of State.