There were two rounds of storms. 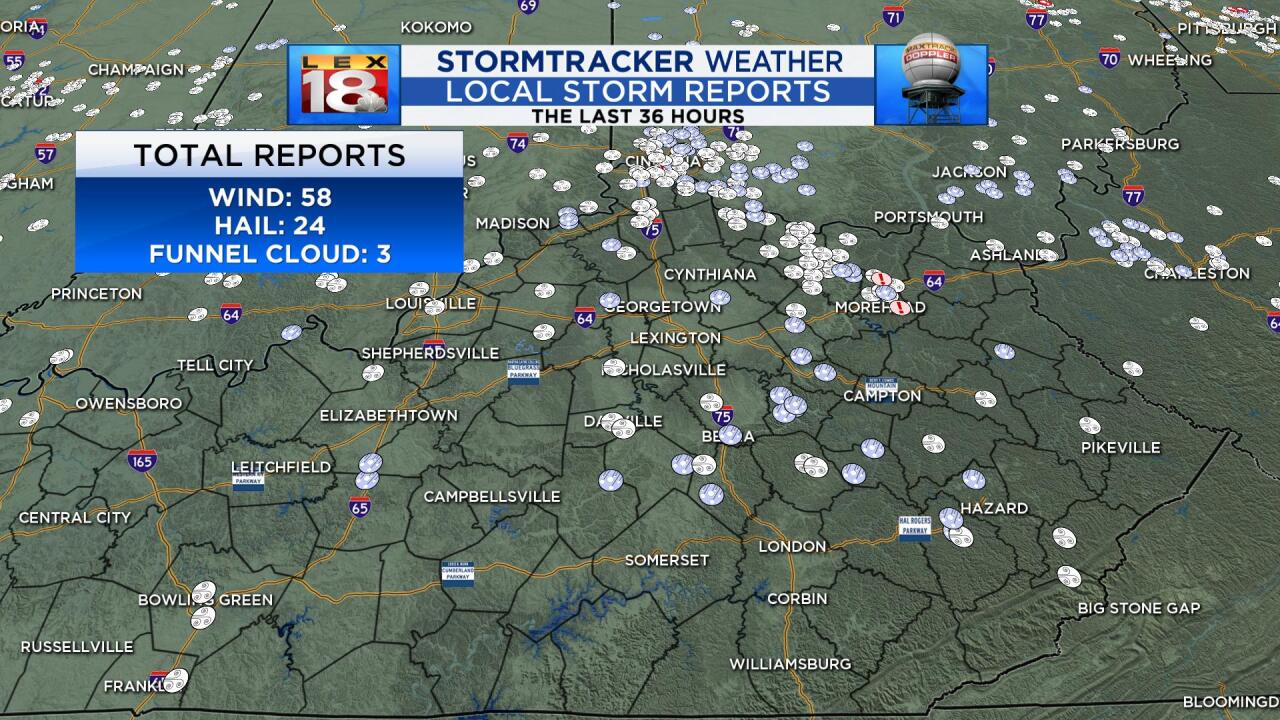 Wednesday brought our first widespread threat of intense storms of 2020. Activity came in two waves - an afternoon round then a late night squall line. These storms produced large hail, damaging wind gusts, and vivid lightning. There were also reports of funnel clouds in Rowan County during one of the two tornadoes warnings yesterday. It was an active day to say the least.

The event began with spotty severe thunderstorms that blossomed during the early afternoon. A stalled boundary draped across northern Kentucky plus a warm and humid airmass provided the ingredients to get these storms going. Hail was the main threat from this first round of storms. Up to quarter size hail was observed across the northern part of the area. The first tornado warning of the day was issued for Elliott and Rowan counties. There were two reports for funnel clouds associated with this warning. Multiple trees were brought down near KY-799 at I-64 in Rowan County.

The late night round was a different beast. Instead of clusters of storms, we tracked a powerful line of storms out of the Midwest and through the Ohio Valley. It was a squall line, which primarily leads to straight-line wind damage. The force pushing the line adds to the intensity of the individual storms. There were severe thunderstorm and tornado warnings up and down the line from Cincinnati to Louisville between 10 PM and 11 PM. The greatest threat of tornadoes was across far northern Kentucky. Although tornado warnings were issued for storms in Nelson and Washington counties, also in Fleming and Rowan counties.

The line of storms produced some fierce winds. One of the Kentucky Mesonet sites in Shelby County recorded a 63 mph gust as the line blew through. For the Bluegrass gusts were in the 40 to 50 mph range. Trees were blown down and some roof damage was done. This line also produced some vivid lightning. At one point there were over 2,500 strikes across central Kentucky.

Last night's storms were caused by a clash in airmass. It was very warm and humid here yesterday with highs near 80°. Meanwhile temperatures were quickly dropping behind the front. Now today, post-cold front, we're only in the 50s and lows will be near freezing the next two nights.