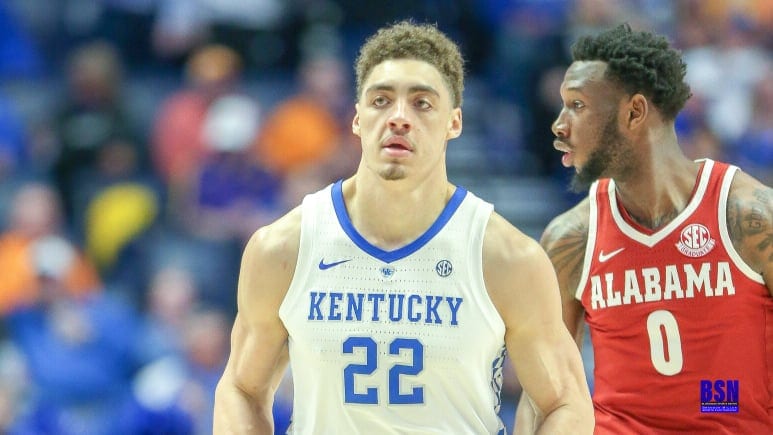 NASHVILLE, Tenn. – Tyler Herro poured in 20 points to help Kentucky to a 73-55 win over Alabama in the quarterfinal round of the SEC Tournament.

UK got a three pointer from P.J. Washington to take an early 7-6 lead. It took Reid Travis just about three minutes to get into his first game since he sprained his knee. He picked right up where he left off and helped the team early.

Then it got interesting. Tied at 9, UK went on a 7-0 run in just 34 seconds. After a steal, Keldon Johnson would finish the fast break with a lay-in. Travis would block a shot that led to Jemarl Baker finishing with a left-handed lay-up. Herro followed that with a three pointer. UK was up 16-9.

Travis would get another block that led to an Immanuel Quickley layup as he was fouled to put UK in front by double digits, 19-9. Kentucky would extend the lead to 15 as E.J. Montgomery tossed a lob to Nick Richards for the slam and Richards hit two free throws. 26-11 UK.

Alabama cut their deficit to single digits as Alex Reese hit back-to-back three pointers. UK was in front 28-21. Herro would hit a jumper and Baker a three pointer to give UK a 33-24 advantage.

The second half started with a fast pace. Travis got a putback, Herro used a euro step to score and then hit a long two for a 49-36 lead.

Nick Richards finished a fast break with a huge slam off a pass from Keldon Johnson. Then, Travis went to work. Washington found him for a strong move to score followed up by a baseline hook shot for a 55-42 UK lead.

From there, Alabama was never able to seriously threaten the Wildcats.

Reid Travis finished with 8 points and 7 rebounds, while Immanuel Quickley also chipped in 12 off the bench.

Kentucky advances to play the winner of Mississippi State and Tennessee.