We continue to track Tropical Storm Gordon, located about 130 miles southeast of Mobile, Alabama. The storm is still classified as a tropical storm with sustained wind speeds at 65 mph, but gusts are reaching hurricane force strength of 75 at times. The minimal central pressure sits just above 1000mb. 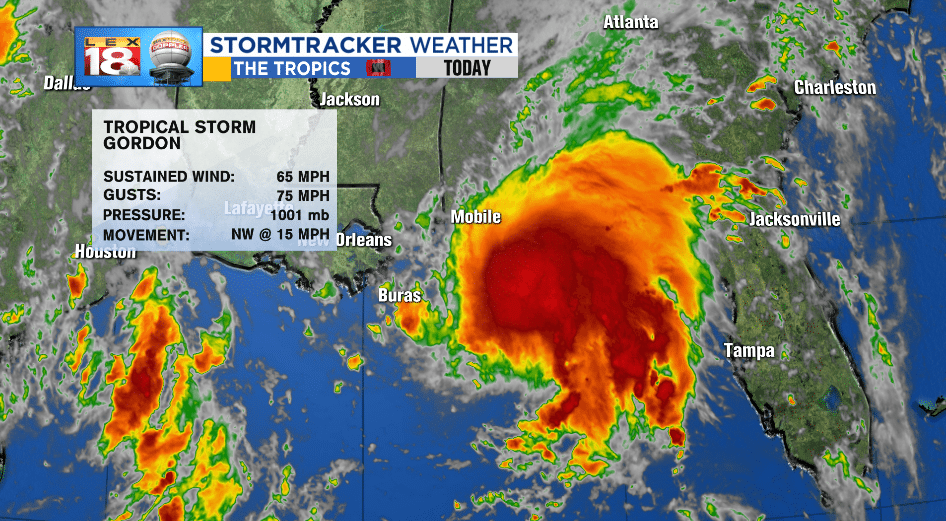 The movement is still northwest at about 15 mph and all major forecast models keep this trend through landfall. Before reaching the North-central Gulf Coast, Gordon is expected to reach Category 1 strength as a hurricane and sustained wind speeds in the developing inner rain band will reside around 75 mph. Mainland landfall is still expected somewhere around Biloxi, MS before midnight after slamming into the Mississippi Barrier Islands shortly before. After the storm pushes inland, It will rapidly weaken, moving into the Mississippi River Valley, west of Jackson, MS. It will continue its northwest motion and become post-tropical as it banks NE around the Arkansas Ozarks. The leftover moisture will be picked up frontally and sent into the upper Midwest. 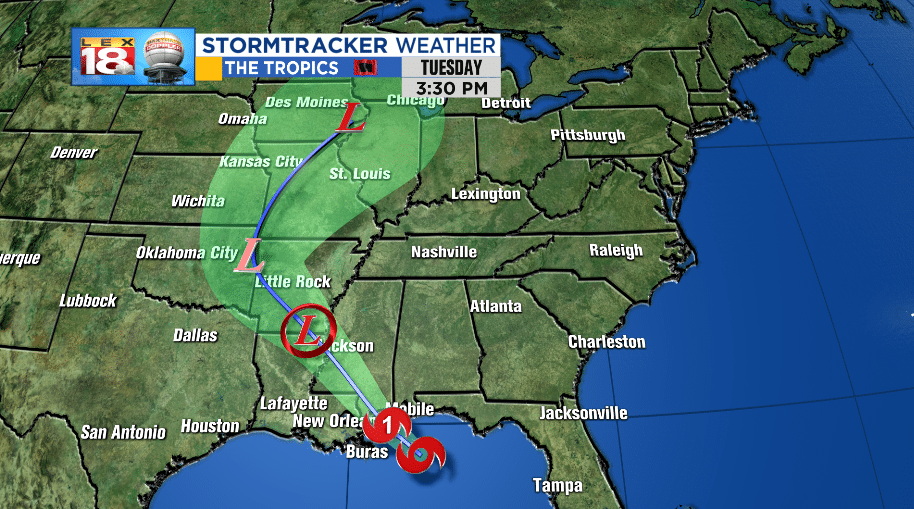 A TROPICAL STORM WARNING is in effect from Grand Isle, Louisiana through Apalachicola Bay in Florida. Inland Tropical Storm Warnings stretch from Eastern Louisiana Parishes and through Southern Mississippi, Alabama, and Western Florida Counties. A HURRICANE WARNING is in effect from the Pearl River mouth through the Florida/Alabama State Line, this includes all Barrier Islands in that stretch. 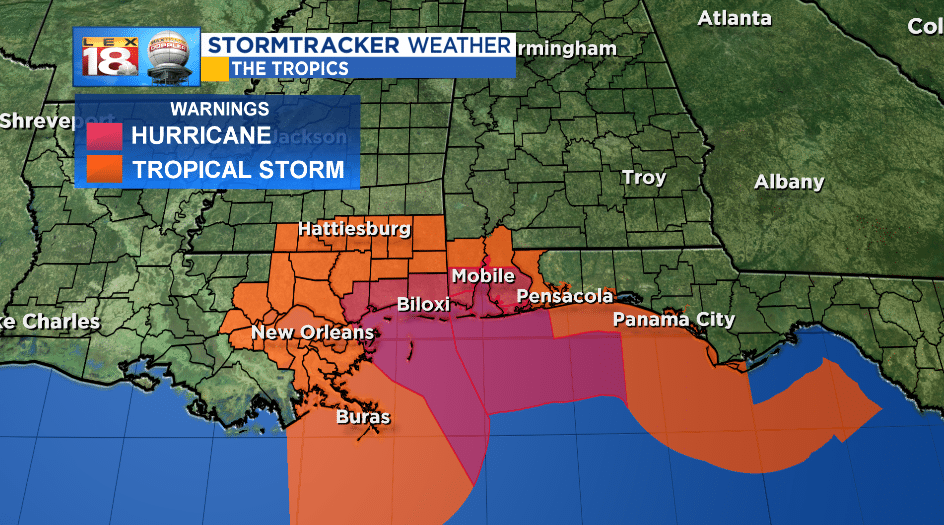 Wind speeds on the northeastern quadrant of the storm will lead to increased storm surge and large wave heights through the next 10 hours. The NWS is predicting the following storm surge heights: 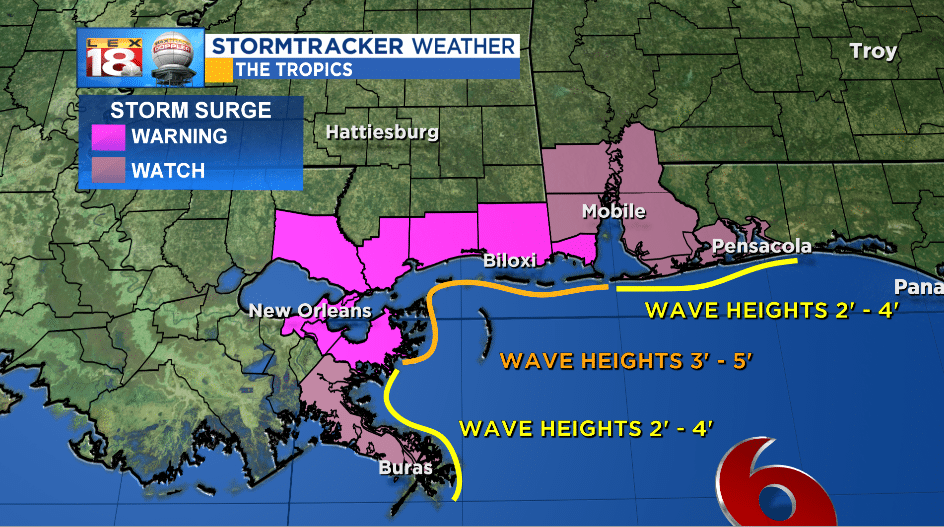 Wind will be an issue, but rainfall will be another thing altogether. Amounts along the Alabama Mississippi state line will range from 2” to 8” from the storm itself. The higher inland rainfall amounts can stretch between 2” to 5” as it moves northward. 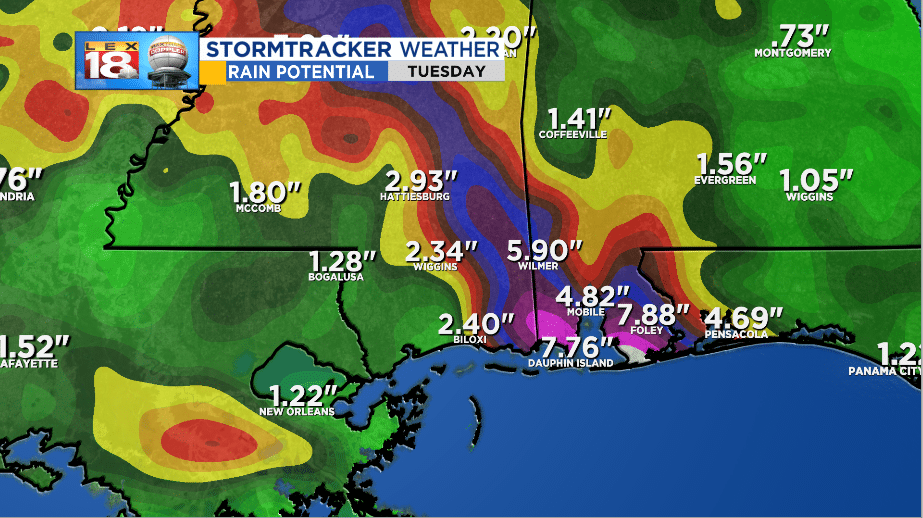 Kentucky will see rain fall from Gordon by the end of the weekend and into early next week. Before it gets here, a frontal boundary will already usher in some rainfall. Between the front and Gordon’s remnants, we’re expecting between 1” and 4” of rainfall through early next week. 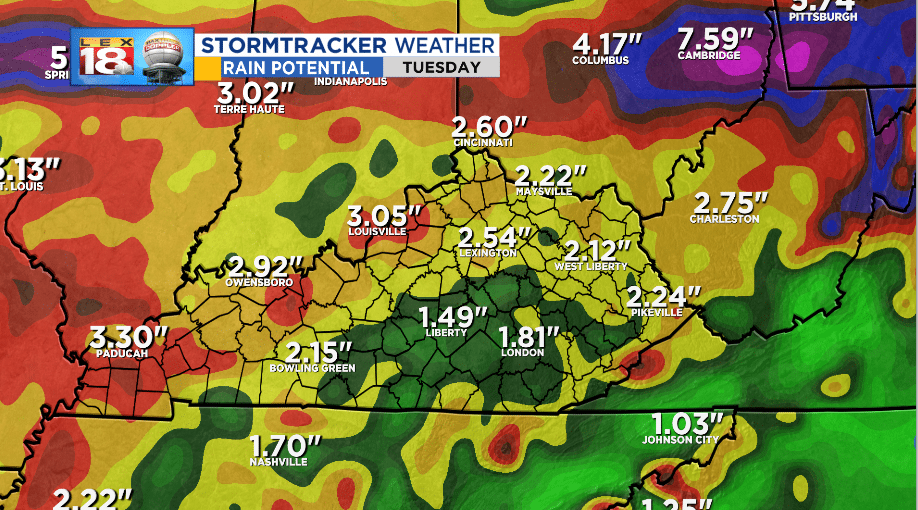 We will continue to monitor Gordon and it’s potential impact to our area. Stay with the StormTracker Weather Team for the latest on the tropics moving forward.