What a night! A nearly-stationary thunderstorm poured rain over Fayette County. Several inches of rain were recorded in a matter of a few short hours. A Flash Flood Warning was issued after a number of areas were inundated with heavy rain around midnight. The buckets of rain made for a historic night in Lexington weather history.

Why did Lexington get some much rain? The explanation begins with a “cool” front that tracked through central Kentucky overnight. The boundary had already sparked widely scattered downpours and thundershowers earlier in the day. A final cluster popped up west of I-75 around 10 PM. Two separate cells of heavy rain – one near Frankfort and the other in southern Woodford County – were tracking nearly-parallel to each other. The cells started to merger near Versailles. Then one big cluster of heavy rain and storm tracked across Fayette County, and took its sweet time in doing so. The MaxTrack Live Doppler tracked steady, torrential rain for an hour and half. The southern and western sides of the county were the hardest hit by the heavy rainfall. 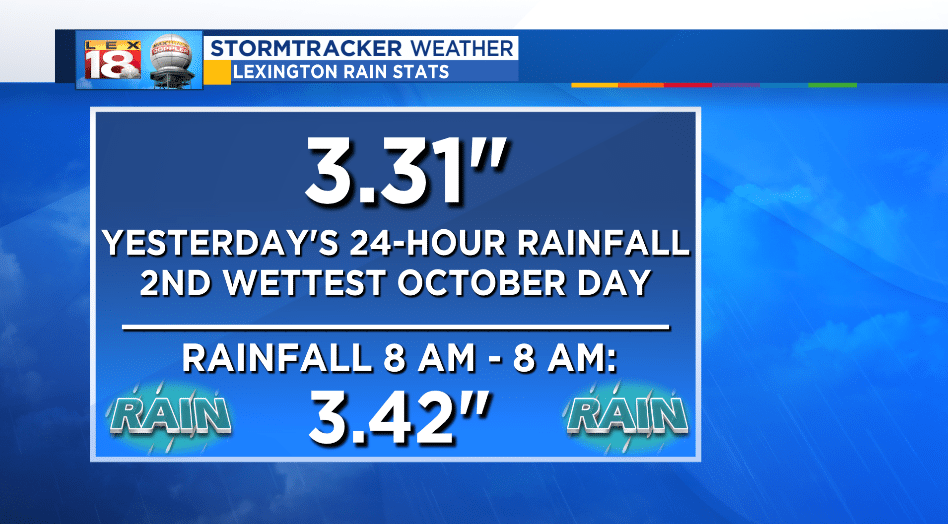 Before 10 PM Thursday, Blue Grass Airport reported a daily rainfall total of two hundredths of an inch. By the 11 PM observation amounts were up over a half inch. The final hour sealed the deal. A 24-hour rainfall total of 3.31″ was enough for the second wettest October day on record in Lexington. 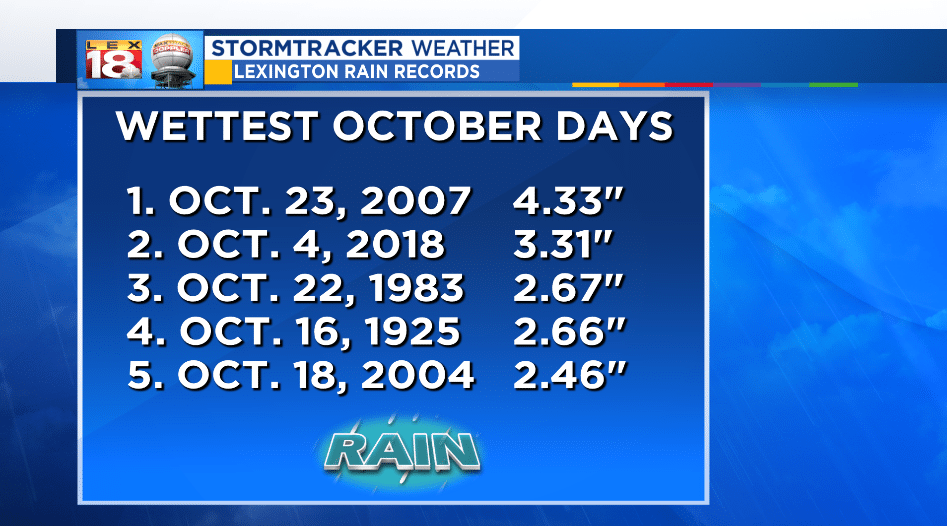 Again most of Thursday’s rain fell during the final hour of the day. Just remarkable! Showers finally cleared out of eastern Fayette County after 1 AM. An additional 0.11″ was recorded at at the airport very early Friday morning. That brought the grand rainfall total from 8 AM Thursday through 8 AM Friday to 3.42″.

The castle’s moat is overflowing after last night’s record rain. And these ponies didn’t have to be led, to splash around. @LEX18News pic.twitter.com/1lrXzp0V56

Eastern counties also dealt with some flooding of their own through the night. The rain tapered off by the morning commute. Once the sun came up some areas were still dealing with debris and standing water. The Kentucky Castle on Versailles Road in Lexington gained a moat overnight.